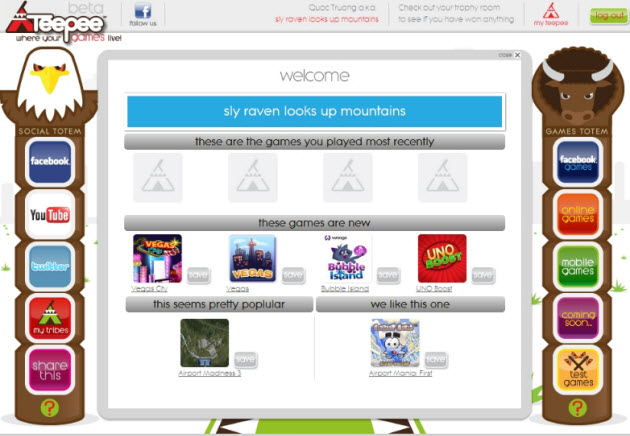 Turner, which owns brands such as Cartoon Network and TNT, will back the development of the game discovery platform of London-based TeePee. In the age of app stores with tens of thousands of games, discovery has become a big problem for both game developers and consumers. Whoever solves this problem will likely fare well.

The amount of the investment wasn’t disclosed. TeePee Games’ Geronimo platform is in beta testing now and has more than 25,000 users. The company wants to become the primary destination for consumers to find and play games across social networks, smart phones and the web.

Users can discover games across a number of sources including Facebook, Adobe Flash game portals and Android smartphones. Social features — such as rewards and loyalty points — will get consumers coming back to the platform on a daily basis to discover and play new games. TeePee’s goal is to create the equivalent of the Pandora music discovery service for games.

“This series of deals signals Turner Broadcasting’s readiness to act on relevant investment and partnership opportunities in the digital and gaming space” said Jeff Kupsky, president of TBS Europe.

Tony Pearce, CEO and co-founder of TeePee Games, said the industry has a rare chance to transform the way people discover digital games across a range of platforms. TeePee Games collects high-level analytics that allows game companies to understand user behavior and act on it. Then it can recommend games to users based on what they like.

Right now, there are more than 35,000 active games on Facebook and more than 50,000 games on the Apple App Store. TeePee says its recommendation engine learns and grows with the user.