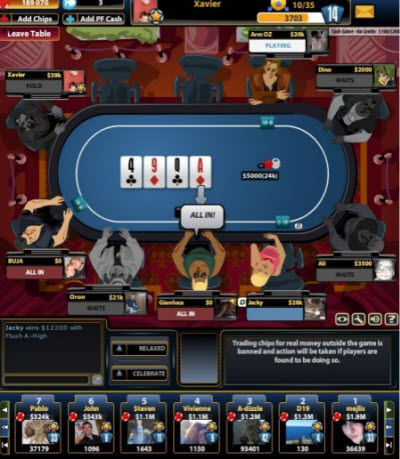 In the fast-growing social games business, Zynga has proven to be a master of copycatting. Playfish, by contrast, has created a number of original titles that have been copied by others.

But today, Playfish is turning the tables with the launch of Poker Rivals, a Texas Hold ‘Em poker game that goes after Zynga’s original hit game on Facebook. It’s a sign of the changing competition on Facebook, and it’s one of the first big moves that Playfish has made since being acquired by Electronic Arts for as much as $400 million.

It’s an interesting twist. Of course, the term copycat is too harsh for creating a game that already has a rival in the market. Video game publishers typically flood the best known genres of games with derivative titles. And only once in a while does a company create a new category.

Since its founding in the fall of 2007, Playfish had the unique distinction of creating hit games with almost every new game that it launched on Facebook. The company’s Pet Society game has more than 21 million monthly active users, and Playfish overall has more than 59 million monthly active users, according to AppData. Zynga’s big hit Cafe World has been criticized as a clone of Playfish’s Restaurant City. The games aren’t that similar, but they both involve restaurants and food.

Playfish executives, such as Sebastien DeHalleux, chief operating officer, say they focus on creating the highest-quality content. DeHalleux is one of the speakers at DiscoveryBeat, our event tomorrow in San Francisco that focuses on how to get apps noticed.

In a blog post, Playfish said, “Poker is an enormously popular game worldwide, so we thought it was high time we gave it the Playfish treatment. We’ve put a lot of time and thought into getting the poker experience just right and we hope it shows. Texas Hold ‘em is by far the most popular poker variant so we’ve started out with a fully featured version of Texas Hold ‘em just how you like it, but we’ve added a few extras to help you get the most out of your experience.”

The company says its Poker Rivals game is authentic poker, with gestures, speech, and a socializing atmosphere that mirror real poker. Players can create their own characters and customize them to their own tastes. You can buy a place to play in or a yacht. Playfish hasn’t done much to promote the game yet. In its typical style, it launches games and then tries to respond to user feedback. It then modifies the game and adds new features, as it will do in this case.