It hasn’t been long since Twine, a semi-intelligent bookmarking service, launched last October. That means it’s too early to call the company a surefire success. On the other hand, all signs so far are pointing that way: A casual check I recently made revealed that Twine’s traffic has been growing far more rapidly than the vast majority of its startup peers.

That may not sound exciting to some disillusioned readers. Twine, if you’ll recall, was an early poster-child for the semantic web through its parent company Radar Networks. Before people saw the service, it enjoyed endless attention from the digerati as part of much-hyped semantic web, which was supposed to be able to make the internet self-aware and intelligent.

By the time it launched last year, though, a lot of geeks had already moved on, as it became obvious that creating the semantic web would take years, if it happened at all, and Twine just helped groups of people collect and share bookmarks more effectively. Along with others, I suggested that Twine had plenty of long-term potential, but just about everyone seemed to believe that adoption would take a long time.

But the boom-and-bust cycles of hype in geekdom don’t affect the outside world. Twine is getting plenty of attention, and that attention doesn’t appear to be coming from the early-adopter crowd that made services like Friendfeed and Twitter popular. Instead, Radar Networks CEO Nova Spivack thinks his company is reaching a broader, less focused group of intellectuals who are experts on an array of subjects. “They tend to be outspoken, smarty-pants people,” he says.

The service is enjoying steady 50-percent-plus growth in monthly unique users (the graph at right, which actually shows traffic a bit lower than Compete does, was provided by the company), and has already topped a million pageviews a month. Some users (like yours truly) also interact with the service through its RSS feeds and daily emails, forgoing the website.

In fact, Twine is growing a lot faster than Friendfeed. That doesn’t mean the two are competitive; when it opens to developers, Twine will likely be integratable into Friendfeed. But it does mean that Twine has tapped into a different audience.

Spivack settled on Digg as a good comparison to Twine when we talked a couple of days ago. Digg, he says, is a news site that tends to focus on just a few streams of content, and the overall group is entirely responsible for voting items up or down. But Twine already has almost 30,000 categories, which helps users find and subscribe to exactly what they’re interested in, and the software actively takes part in arranging the information. Digg aside, there may not be an exact equivalent to what Twine does, which could be why it’s growing so quickly. 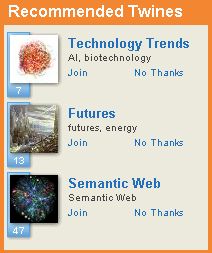 Of course, it’s hard for a site with so many categories to keep focused, which is the problem that led some, like ReadWriteWeb, to declare Twine a disappointment last year. The site has gone through some major changes since then but is still very much a work in progress with plenty of orphan “Twines” cluttering the site and some navigation challenges.

Over the first part of this year, Twine will also be adding more user control over content and interest feeds, visualization tools and graphical interfaces, and some social networking tools like popularity rankings and social filtering, as well as integration with real social networks like Facebook. The service is also preparing to open up to developers and allow data to be pushed to outside services.

Keep an eye on Twine — if it keeps up its growth and hits its development targets, it may yet become a company to reckon with.

Update: The comment section on this story has turned into something of a brawl. Enter at your own risk. To summarize the points that seem important: