Twitch is launching Squad Stream, a new feature that lets up to four people to simultaneously stream their videos in a single screen window to fans. It enables players to team up in a squad and play popular games for a stream that goes to one large audience.

The new product is part of Amazon-owned Twitch’s ambition to be the leader in multiplayer entertainment, providing viewers, streamers, and communities more ways to play, collaborate and watch together.

Normally, a streamer can broadcast only one video stream to Twitch. If they want to play a game with multiple players, only one of them can stream with small windows of the other players. It takes a lot of work to set that up. And that’s even harder to do if the streamers are all in remote locations.

With Squad Stream, Twitch has solved the technical problem of combining streams and presenting them as a single screen to players without running into bandwidth problems, said Twitch’s vice president of creator experience Hubert Thieblot, in an interview with GamesBeat.

“If we are all playing Apex Legends together in a squad, the viewers will be able to see a single screen and see how all of us are playing with” three split-screen views on a single screen. Every streamer benefits from the views. 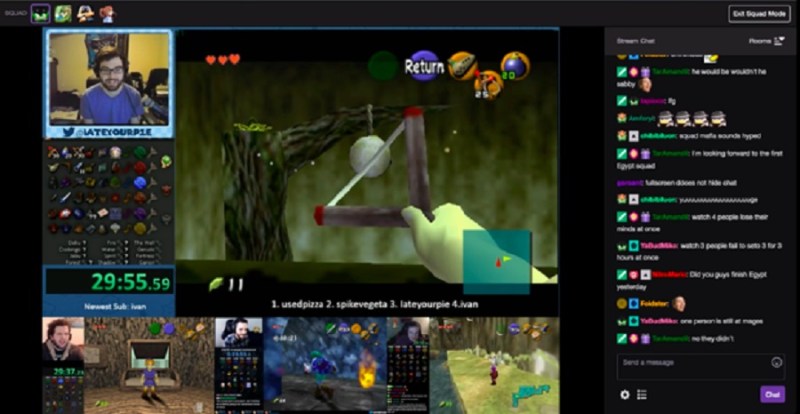 “The audience can see what each of us is doing,” Thieblot said. “Combining streams is very hard to do. Our solution has no changes for how you as a broadcaster would create your content.”

Twitch Squad Stream product marketing manager Justin Oh said in an interview that it could also be used outside of games. You could see four chefs do a cookoff with cameras focused on each chef. And you could see a racing game from multiple perspectives, or four people building a castle in Minecraft.

Squad Stream gives the viewers more ways to discover new creators that are playing alongside their favorite streamers. This will in turn also give creators a chance to increase their exposure and new followers from each other’s community.

It’s a little like the split-screen technology that Google showed off with its Stadia cloud-gaming platform introduced last week. But in this case, the streamer is completely in control of who joins the stream, Thieblot said.

“This is how we can make the life of streamers better on Twitch today,” Thieblot said.

Viewers get more angles on the action, a way to support more of their favorite streamers with ease, and a chance to chat with several communities at once.