All was not quiet in the Duboce Triangle neighborhood of San Francisco in the early hours of Saturday morning. At around 3:38 a.m., an unknown male approached the residence of Twitch.tv cofounder Justin Kan and vandalized his home with a racial slur.

In footage captured by Kan’s Dropcam, a man walked by with his bike, took out a marker, and proceeded to mar Kan’s garage door with the epithet: “Fuck you gook!” His attack employs a derogatory slur traditionally used against someone of Filipino, Korean, or Vietnamese descent. 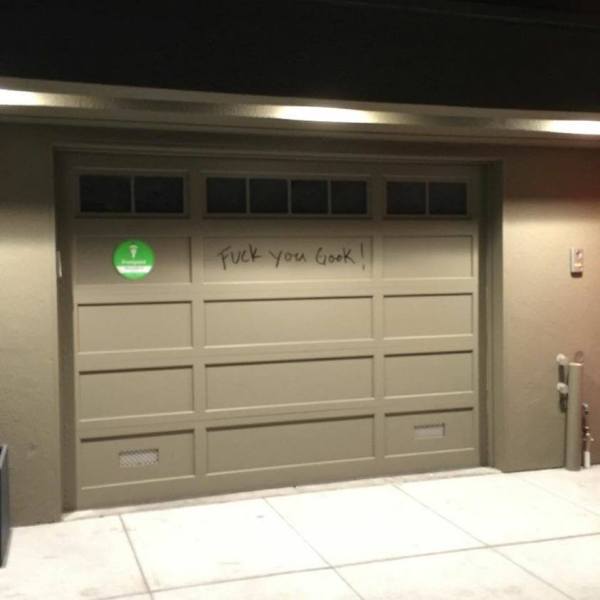 Above: The racial slur left on the garage of Twitch.tv cofounder Justin Kan’s home on August 15, 2015.

Kan, his fiancée, and his two brothers were home at the time. None of them could identify the person in the video or recollect interacting with anyone who might have been motivated to target them: “I can’t remember pissing anyone off,” said Kan in an interview with VentureBeat. Above: Screenshot of the person caught vandalizing the residence of Twitich.tv cofounder Justin Kan on the morning of August 15, 2015

Kan posted the incident on Facebook and Twitter on Saturday morning, saying that he doesn’t know who the individual is and had originally thought the person was homeless. However, Kan is not so sure now following sleuthing by the Twitterverse throughout the day. Others have chimed in with information about the suspect, including Science Inc. partner Peter Pham who opined that as the culprit’s “hat rim was crisp,” and his shoes were “white at base,” these and other details seemed to indicate the suspect was not homeless.

@Jason @justinkan no. hat rim was crisp. Shoes are white at base, and bike was a nicer road bike. Beard was bushy but more hipster bushy

Following the incident, Kan told us that a “random neighbor” has painted over the racial slur “without my permission.” He also believes that he was deliberately targeted because the Duboce Triangle neighborhood is not exactly considered an Asian neighborhood in San Francisco.

At least in the technology space, Kan is a popular individual. He’s the cofounder of Exec, Justin.tv, SocialCam, and Twitch.tv. Currently he’s a partner with Y Combinator. Perhaps the suspect may have been irked by a past interaction with Kan. But that’s for the San Francisco Police Department to figure out.

You can watch the surveillance video here:

If you have any information about this incident, please contact the San Francisco Police Department.