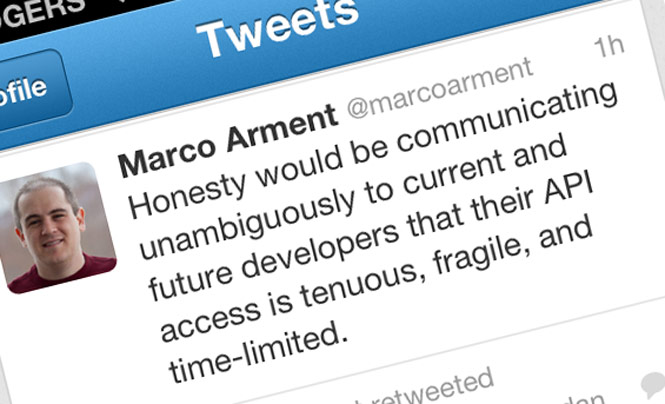 We knew when it was announced that Twitter’s new, more restrictive API policies were going to be a massive PITA for developers. They arrived two months ago, and developers are getting squeezed by the new rules.

But it’s not the written rules that are the problem. It’s the unwritten ones.

At least, according to Marco Arment, developer, blogger, general gadfly, and — of course —  creator of Instapaper. Arment is calling out Twitter for, as he puts it, “being a dick again” (yeah, check the URL, not the title).

The problem is that Atta Elayyan, who built Tweetro, a sweet-looking Twitter app for Windows 8, asked for permission to go over Twitter’s API connection limitations. Tweetro got popular, quickly, averaging 3,000 to 4,000 downloads a day from the Windows Store and bursting well past the maximum of 100,000 users that Twitter allows for free.

So he asked for an exemption, because Twitter doesn’t have an official Windows 8 client, making Windows 8 theoretically an underserved market which could potentially qualify for an ask-us-for-permission exemption. But Twitter has already announced that it is building one. So Twitter denied the exemption, saying:

We know that there are developers that want to take their passion for Twitter and its ecosystem to unique underserved situations. As such, we have built some flexibility into our policy with regard to user tokens – which went into effect September 5th, 2012.

Unfortunately, it does not appear that your service addresses an area that our current or future products do not already serve. As such, it does not qualify for an exemption.

Arment takes issue with that — as he has before — saying that the wording of the rule is vague and essentially meaningless. The real rule, he says, “if Twitter was honest and direct, is simple: ‘We don’t permit anyone to exceed the limit unless we feel like it.'”

That’s perhaps a little harsh, since the company has said don’t build Twitter clients, we’re doing that, and has announced plans for a Windows 8 native Twitter client. But it is shutting the door on developers who are promoting the service.

Which effectively means, according to Arment: Don’t develop for Twitter. And he’s taking that message to Twitter: