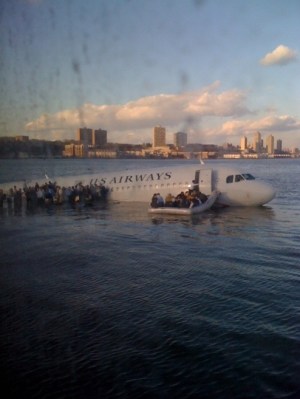 A US Airways plane crashed into the Hudson River this afternoon shortly after takeoff from New York’s LaGuardia Airport. As of right now a rescue mission is underway, but early reports indicate that everyone on the plane might be okay. While the mainstream media was quick to jump on the story, so too, as is the case these days, was Twitter.

Even more amazing though may be the picture that Janis Krums, a man on one of the first rescue boats on the scene took. The picture (right) was taken with his iPhone and sent via TwitPic, a third-party service which a lot of Twitter users use to send pictures to their contacts, to Twitter.

http://twitpic.com/135xa – There’s a plane in the Hudson. I’m on the ferry going to pick up the people. Crazy.

While sites like CNN have some pictures of the downed plane, I have yet to see one as good as the one Krums took.

Many people are wary of reports coming from Twitter — and in some cases, rightfully so — but pictures, at least ones taken this quickly after something like a plane crash, usually don’t lie. The combination of the iPhone (or any camera phone), Twitter and services like TwitPic proved very powerful today.

Update: It looks like TwitPic is down, undoubtedly as everyone retweets Krums picture.

Update 2: Silicon Alley Insider got some footage of Krums being interviewed about his picture on MSNBC. Krums indicates the picture was taken just a few minutes after the plane actually went down. Find the video embedded below.