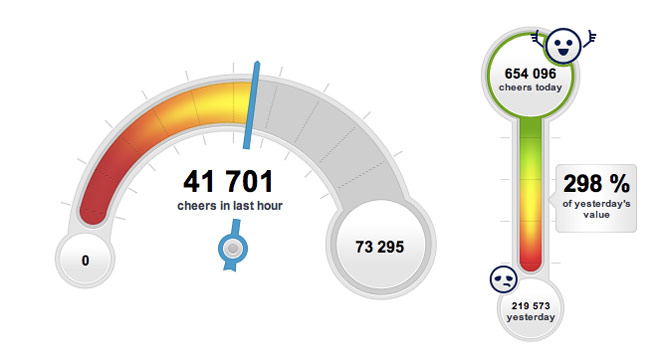 London 2012 starts today, and many of us will be glued to screens both large and small for the next 16 days. But while we’re watching, we’re probably also tweeting: cheering our teams and our stars.

The social marketing company has created Cheer for London, a social media analytics tool that reveals what’s hot and and who’s cheering the loudest. The company calls it the CheerMeter, and it tracks Olympic-related tweets on an hourly basis, breaking them down into tweets per hour, per day, by language, and by sport.

“We’ve built the CheerMeter to act as a virtual stadium for all sports fans, supporters and critics to track the social media performance of individual sporting events, athletes, and associated brands in real time,” Socialbakers chief executive Jan Rezab said in a statement.

As you might expect with the opening ceremonies on, tweets are rising fast this morning: 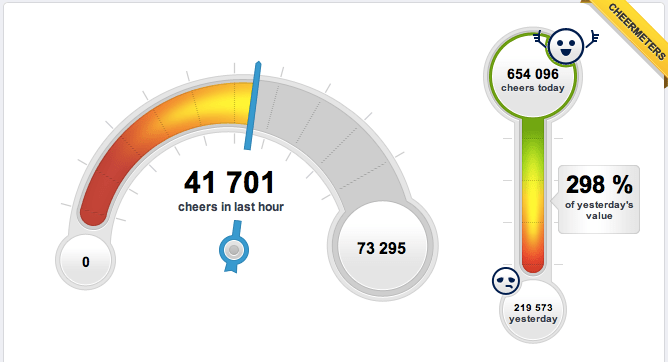 Currently the top language is English, by a massive margin, and the top sport is rowing, probably due to the fact that rowing is one of the first sports off the mark, tomorrow. And, of course, the English love rowing.

London 2012 is 16 days, 200 nations, and 300 events. Perhaps in a couple of weeks the cheer meter will also be able to reveal how many tweets this Olympics will generate.

For updates — the tool is live and does update in real-time — check Cheer for London.