Twitter is now officially number two on the list of the top 10 internet initial public offerings of all time. While well behind Facebook, which raised over $16 billion, Twitter beat out Google, which raised only $1.7 billion in its IPO, and Yandex, the Russian search engine.

After hitting an opening high of as much $49 — an 89 percent pop — Twitter is now trading at $46 a share, which is still hugely up from its initial pricing of $26 from yesterday. At $26 per share, Twitter raised a bit less than $2 billion from the sale, putting it well over Google, Zynga, Groupon, and almost every one of the ten biggest Internet company IPOs in the U.S., ever: 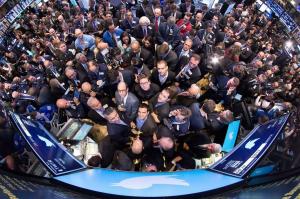 Twitter is not yet making the list of top 10 internet IPOs for first-day returns, however, as an 89 percent pop doesn’t even make it onto the list, which starts at 104 percent. That’s actually a good thing for the company, as a massive day-one pop for your shares looks good, but means that you left a lot of money on the table for investors to scoop up — and not give to the company.

Actor Patrick Stewart — Jean-Luc Picard of the starship Enterprise — rang the opening bell for Twitter. This is a tech company, after all, and the founders are geeks. 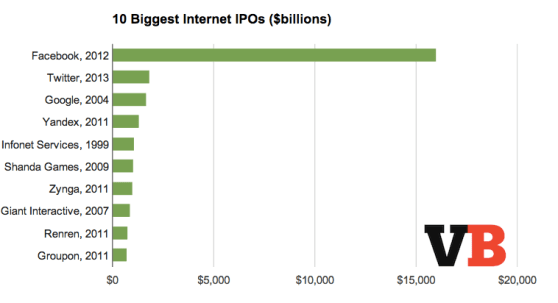 One thing the Twitter IPO proves, at least in this case: Listen to the experts, not the social media gurus. Investors and grey-market speculators believed the IPO would have a 53 percent pop, but social media aficionados almost universally panned the offering, with 94 percent of the IPO mentions on the Twitter network itself being negative. It turns out, at least today, that the experts were right.

And the best part of the IPO?

No glitches, like those that afflicted Facebook’s launch into the public markets.