Twitter direct messages, or DMs, are broken. But the soon-to-IPO network of the now just might fix that with a new dedicated messaging app, a la Facebook Messenger. 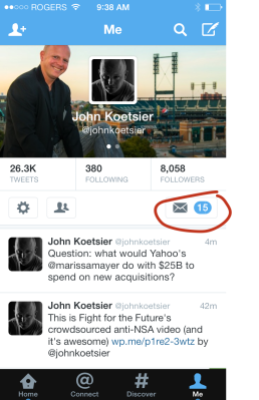 Above: Direct messages are a tiny afterthought in Twitter’s mobile apps — and websites

Now, however, there’s speculation that Twitter may start its own private messaging app, much like WhatsApp, Line, or Facebook Messenger. Messaging apps are absolutely killing it right now — six of the top ten Google Play apps in August were messaging apps. And there’s room for disruption, since many of those messaging apps have pay-to-play in-app purchases for the most-wanted features, which Twitter could potentially leverage to woo users away, if it launched a competing, better product, with premium-type features for free.

Just the fact that messaging is so hot means it’s an area Twitter can’t afford to ignore. Even social giant Facebook hasn’t with its own dedicated messaging app. But there’s also the fact that DMs on Twitter are, frankly, a joke.

Direct messages are a tiny afterthought in Twitter’s mobile apps and websites. And even after you’ve found them, the tools Twitter provides for DMs are rudimentary at best, and user-hostile at worst, making them completely unusable except in the most basic, low-volume cases.

I recently had the chance to experience this, as my Twitter account mysteriously started following people last weekend:

Some were overjoyed at the follow, and immediately direct messaged me to thank me, to connect, or to pitch me on stories. Which filled my DM in-box to bursting, and highlighted its issues.

If you have multiple DMs, you can only view one at a time, and not in context of the others. Scrolling to one 20 messages or so down, opening it, and answering it does not leave you in that location, but bumps you right back to the top of the list. On the web, Twitter opens up a small overlay window on top of its primary interface, killing all native browser functions such as Back, or bookmarking. And you can’t message more than one person at a time.

In other words, if Twitter wants to reinvent messaging in a Twitter environment, it has a very target-rich environment for improvement.

Moving messaging into a Twitter Messenger app would be a very interesting extension to the Twitter ecosystem. On the one hand, it would detract from Twitter’s current emphasis on the update-of-the-moment, the social network on the now, and a heavy media, music, and news focus that encourages a read-only or at least read-first approach to the “social” network.

On the other hand, it would bring back more of the social, more of the community, and give people on Twitter a chance to experience the best of both worlds: A public, news-focused, informational treasure house, while carving a small private space — or a least limited public space — out of the global conversation.