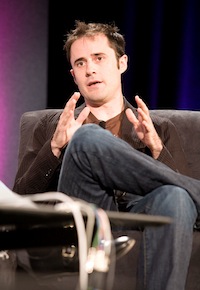 Towards the end of his keynote interview at the South by Southwest Interactive conference in Austin today, Twitter co-founder and chief executive Evan Williams talked about the advice he gives to entrepreneurs. For one thing, he encourages them to find ideas that are really big and disruptive, not just potential moneymakers.

Williams said he’s the kind of entrepreneur motivated by “creating things in the world that didn’t exist before,” but he acknowledged that there are others who are more motivated to make money. (And Twitter-haters might argue that if Williams had been a little more interested in money, the company might have found a business model by now.) So perhaps it’s best to think of this as “advice for entrepreneurs who want to be like Evan Williams.”

He also said he encourages entrepreneurs to not just think big, but also to think differently. Sometimes that can be hard if you’re in Silicon Valley — it’s a great area to build a technology company, but it’s easy to get locked into the Valley mindset, he said (though he didn’t offer many details about what that mindset entails).