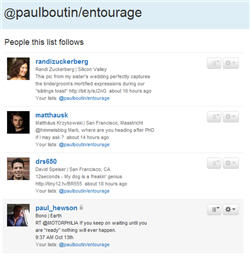 Twitter’s new feature, which the company calls lists, allows users to group together curated collections from among the people they follow.

Twitter rolled out the lists feature to a test group who simply found a notice at the top of our home pages upon visiting them today. The notice ends sarcastically: “You’re part of a small group receiving this feature, so don’t tweet about it yet!”

The ability to create groups is possibly the most in-demand feature among Twitter users. Reading one big river of updates from everyone they follow quickly becomes a mess for users who follow lots of other users.

Twitter has stalled on rolling out this feature since day one of its existence, when users began asking for it. Startup companies present.ly and yammer jumped in and filled the demand for a groups feature, as did many others. It’s unclear why Twitter waited so long to roll out this feature.

I’m still playing around with lists. Email me at paul@venturebeat.com if you want me to try anything out for you.