Socialcast offers what’s best described as Twitter for work. The company sells both hosted and self-installed versions of a Twitter-like stream of updates, with extra features built in to make security and privacy-conscious IT managers feel more comfortable about adopting anything that even looks like Twitter.

The new version, dubbed EASE for “enterprise activity stream engine,” lets the house geeks hook up other IT systems to Socialcast, so you could, say, get a tweet when the printer is no longer out of paper.

The killer feature, though, is integration with Microsoft Outlook, as shown below. People who use Outlook understand the power of having your communications and your schedule managed by the same piece of software. Putting Socialcast inside Outlook gives them a way to communicate in short, real-time broadcasts to anyone who wants to know, rather than putting everything into emails that must be correctly targeted to specific people or lists.

EASE can be set up in one of three ways. Socialcast can deliver the entire product remotely — the software-as-a-service model. Or a company can set up its own internal Socialcast service to keep everything behind the corporate firewall. A third option, called premium hosted, mixes the two: Socialcast hosts the service, but it’s integrated with the client company’s address book, which lets the IT guys control access without having to use a separate console just for Socialcast accounts.

Pricing is variable, as with most enterprise software.

Socialcast, based in San Francisco, was founded in 2005. The company has raised $1 million from True Ventures and another $400,000 from angel investors. 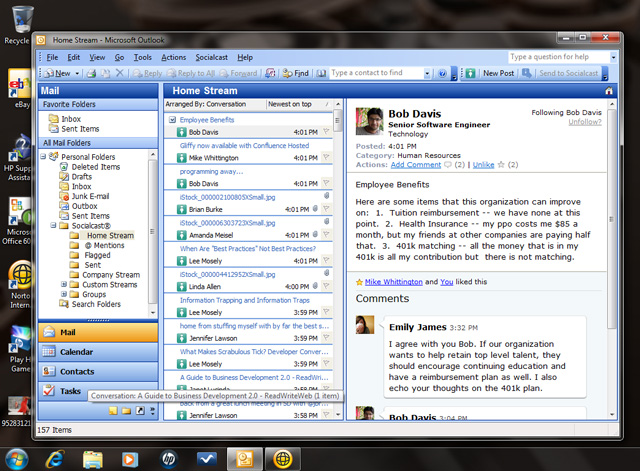