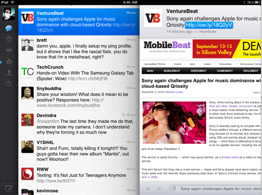 Much awaited by many, Twitter released its official iPad app some hours ago. And it’s something of a gem — if you think you know what Twitter apps on touch screen devices feel like, you’re going to be in for of a treat. You can downloaded the app from Apple’s app store today for free.

The first thing striking about Twitter’s iPad app is its friendliness to first-time users — whether they’re just new to the app or to Twitter itself. Instead of being hit with a login box upon initial startup as with a lot of Twitter apps, it shows you categories like Art & Design, Science and Travel on the left, and trending topics on the right, along with Sign Up, Sign In, and search boxes. Tapping any of the categories, trending topics, or making a search reveal tweets in the right panel. If your use only extends to occasionally lurking through categories and trending topics to see what’s being talked about, you might not even see the need to sign up.

Unlike other apps which use panes only in landscape mode, Twitter’s makes no fuss about its pane-oriented design. Once logged in, the left pane lists the usual suspects: Timeline, Mentions, Lists, Messages, Profile, and Search, and the right shows the tweets. Tapping on a tweet brings up another pane on the right, with the tweet at the top, and any link included in the tweet opened usefully below it. If a tweet is a reply to another, the entire reply thread is shown below instead.

This is where the app begins to set itself apart from any iPad or Twitter app that we’ve seen before — at least, in terms of user-interface. Fairly intuitively, you can drag each pane into, out of, and “almost” out of view, using quick swipes. A couple of use-cases: you tap on a tweet, read it, and slide it out of view. Or, you slide it slightly to the right so that it is just out of view as it loads the embedded link — most useful for videos — while you continue scrolling through your timeline and slide back to it when it finishes. 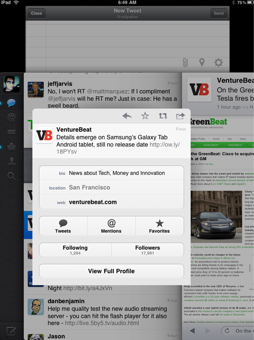 Another neat innovation is the use of gestures. Pinching outward on a tweet brings up a popup box that gives you a quick overview of a Twitter user, including their bio, location, follow counts, and links to jump to their tweets and mentions.

And finally, as if all the panes weren’t already enough, pressing the Compose Tweet button in the bottom left brings up a yet another pane at the top, while the keyboard slides up from the bottom. Everything in between the keyboard and tweet compose box stays in the middle, making it somewhat useful for you to be able to read and browse tweets even while you think of what to type in those 140 characters.

There are a couple peeves worth mentioning. First, the app doesn’t seem to make full use of its landscape mode — every screen is just a horizontally expanded version of the portrait mode. The extra space on the side on some of the panels could be used better. Second, as intuitive as it is, there is a slight learning curve to all the sliding and swiping and pinching. Some users may initially get confused when things start to slide in and out of view.

With that said, it’s a solid effort by Twitter. The company could have easily played it safe and given users something tried and tested, but there seems to have been an attempt to raise the bar in terms of user experience and the product in general. It’s going to undoubtedly make a dent in some of the other Twitter apps, most of which are paid. Why pay $5 for unknown app X when Twitter has quite an impressive offering of its own for free?

Back in April, the company acquired Tweetie, the maker of the popular desktop and iPhone Twitter app. While this app isn’t based on previous work by the developers at Tweetie, the influence on the product is clearly visible.