Are you one of those people who won’t stop twittering about the NCAA college basketball tournament happening now? Here’s something for you. A site that lets you exchange tweets with other people who are watching the same tournament game as you. Called MarchTweetness — a Twitter pun on the colloquial “March Madness” name for the tournament (har) — it’s a partnership between advertising network Federated Media, Twitter itself, and advertising sponsor AT&T. 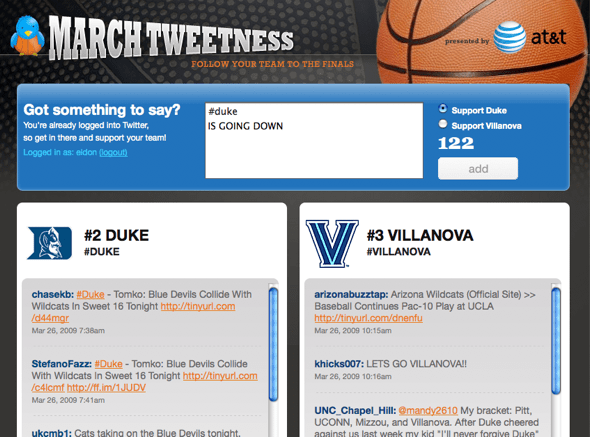 To get started, you just sign in using your Twitter account. If you’re already signed in to Twitter, you can join the site with just one click — Twitter is apparently checking its home site to see if you’re already online. Then, you can choose which games to watch. Click on a given game, and you can see a running stream of tweets from other users about each team. To get your own message to show up, send a tweet with the hashtag for either of the two teams playing — so #duke or #villanova if you’re watching the Duke-Villanova game. The message bar on the site automatically inserts the hashtag of the team you tell it you’re supporting to make tweeting easier.

This is the second vertical site launched by Twitter and FM (disclosure: FM separately sells some ads for VentureBeat). The two companies recently launched a site for reading aggregated tweets from top business executives, called ExecTweet; that site makes money through an advertising sponsorship from Microsoft.

What’s Twitter’s business model? There’s lots of speculation about a for-pay service for business customers, real-time Twitter search ads, and much more. So far, though, these two niche sites are where Twitter is trying to make money. That’s sort of problematic, though, as third parties are busy building niche vertical sites for Twitter as well — like Stocktwits for reading tweets about stock trading, for example. Twitter has recently said it wants to work with third parties rather than compete against them, so one has to wonder how many more verticals they’re going to launch.

Update: The New York Times has some more details on Twitter’s revenue plans, which are a bunch of experiments right now. Here’s more:

As for a more official business plan and meaningful revenue, “We are not trying to be vague — we are still trying to figure that out,” Mr. Stone said. This month, Twitter hired its first staffer to focus on revenue. Anamitra Banerji, former director of ad product marketing and management at Yahoo, is researching how businesses use Twitter to figure out which new features they would find most valuable.