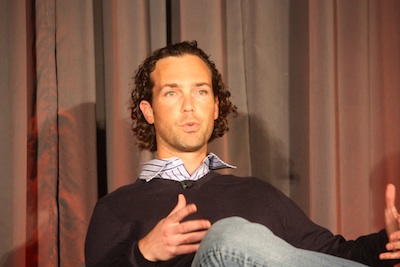 Want to know where Twitter’s taking its microblogging service next? Well, Twitter vice president of engineering Michael Abbott spelled it out today at VentureBeat’s Mobile Summit.

Abbott said the three main areas of the company’s product focus are discovery, relevance, and mobile. As evidence of how important mobile is for Twitter, he repeated the statistic that 40 percent of tweets now come from mobile devices. And it’s growing fast — mobile signups increased by 50 percent in the first three months of the year.

Speaking at a mobile event, Abbott was understandably focused on mobile, but he also suggested that there’s a lot of overlap between the three areas he pinpointed, because Twitter can use location information to help users discover the most relevant content. Twitter already includes some nods in this direction, like the ability to see trending topics filtered by region, but it could probably do more to filter tweets based on your location and other bits of data. Abbott said, “You’re going to see a lot of big advances” in this area: “The first and foremost thing is, how do we connect that interest graph to you as a user?”

In one recent attempt to combine relevance and mobile, Twitter fumbled. It added the QuickBar for displaying trending topics in its iPhone app, but it was criticized as ugly and intrusive and earned the nickname the “#dickbar”. Abbott said that, while the idea was good, Twitter wasn’t “necessarily happy with some of the quality of the content,” so it eventually removed the feature. Nonetheless that kind of “rich notification mechanism is really important,” he said.

Abbott added that, while it’s crucial for Twitter to make sure that user experience is “really high quality”, the team needs to “feel comfortable” taking more risks with new features, then rolling those features back if they don’t work out.