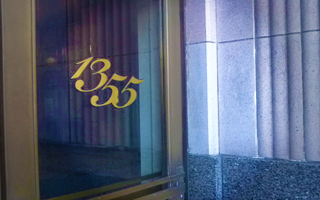 We got a sneak peak at Twitter’s new headquarters today during a press event about the site’s full-fledged overhaul.

But Twitter.com isn’t the only thing that’s getting an overhaul: In about six months, microblogging company is moving to its new headquarters in a gorgeous, old Art Deco building in San Francisco.

While the evirons of the company’s new digs could be described as “shabby” or “down-at-heel,” and are certainly replete with empty buildings and “for sale” signs, Twitter employees are excited and optimistic about the new site.

Twitter’s new home at 1355 Market is definitely a fixer-upper. The building doesn’t appear to have any other tenants that we could see, and every floor we saw was gutted and ready for renovation.

But the place has good bones. The building was once the site of the now-defunct San Francisco Furniture Mart, a wholesale market that was only open to the public twice a year. At the press event today, Twitter co-founder Jack Dorsey explained that the construction on this Art Deco-era building was completed in 1937, the same year that construction was completed on the Golden Gate Bridge.

The move should happen around June 2012. All of Twitter’s 700 current employees based in San Francisco will relocate to the new building.

Of course, there’s more than enough space for those employees. Twitter is occupying three floors of the building, a total of 220,000 square feet, which CEO Dick Costolo said was “enough space to hold thousands of people.”

“We’re going to need all this space to scale the company,” said Costolo.

For now, however, the office space is still raw, with exposed beams, concrete floors, no heating to speak of. One spokesperson told us that all the attendees at today’s gathering almost had to wear hard hats and vests; only the small room we were in was approved for public consumption.

We were also told that the roof will be cleared to make way for a garden.

Twitter also has international offices in London and Tokyo, and several offices around the world will be opened in the middle of next year, around the time of the move to 1355 Market.

Twitter is certainly growing fast enough to fill the space in due time. The company revealed today that signups have increased 25 percent since Twitter launched its partnership with Apple.

And in terms of revenue, eMarketer estimated today that Twitter’s global advertising revenues will grow 210 percent to $139.5 million in 2011, up from $45 million in 2010. Last year was the company’s first full year selling ads, and early in 2012, Twitter will also fully roll out its self-service ad platform to rake in the long tail of ad dollars (and to better compete with Google and Facebook, which have similar offerings).

Many thanks to VentureBeat’s Sarah Mitroff and The Next Web’s Drew Olanoff for photography hardware help.