With the new targeting capabilities, advertisers can better target their ads by looking at whether or not a user has installed their app, if they’ve downloaded it but haven’t registered, and so on. This new ability builds on Twitter’s recent announcement that it will track users’ apps on their smartphones.

Moreover, advertisers can combine mobile apps, lists, and website visitors to customize their audience targeting, Twitter says. And since the segments are updated in real-time, it’s a flexible tool for advertisers. 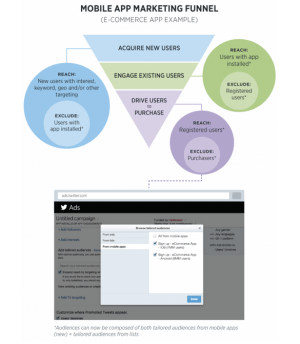 These new targeting abilities are now possible largely because Twitter recently started to track what apps users have on their phones. The tracking is opt-out on both iOS and Android, and can easily be disabled inside the app, or through a smartphone’s ad tracking settings. At the time, the company said it would help users get more personalized content, including “who to follow” suggestions, relevant tweets, and other content it adds to your timeline, as well as its promoted content.

Twitter also recently released Answers, which lets advertisers track for free app downloads attributed to Twitter. Answers is part of the Crashlytics Kit, which Twitter released as part of its Fabric mobile developer tools. Advertisers can also access the tool through one of Twitter’s mobile measurement partners such as AD-X Tracking, Apsalar, AppsFlyer, Kochava, MobileAppTracking, and others.