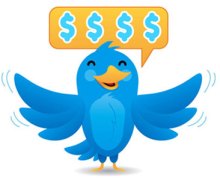 Content deals with Google and Microsoft, plus renegotiated rates with the telecom companies that carry its members’ tweets, have combined to make Twitter profitable,  BusinessWeek veteran reporter Spence E. Ante wrote in an article published today. That’s a big surprise for a company whose stated business model has basically been “we’ll figure it out.”

The Google deal and Microsoft deal, both announced in October, make Twitter members’ content available to Google’s search engine and to Microsoft’s Bing. These deals are worth around $25 million over several years, according to Ante — $15 million from Google, $10 million from Bing.

But the big change to the company’s profit-and-loss math is that Twitter, which collected $155 million in funding, a billion-dollar valuation, and celebrity status for its brand through Oprah Winfrey and other celebrity users, has amassed enough negotiating clout to knock down its bandwidth bills.

Twitter won’t have to make its money by serving ads and selling premium accounts, if it can continue to sell its members’ tweets as valuable real-time Internet chatter. Metrics firm ComScore estimates that 58 million people use Twitter each month, according to the article.

Twitter has not divulged its revenue nor its costs, but Ante claims that entrepreneurs estimate the company currently costs $20 to $25 million annually to operate. If that’s true, the two search-engine deals can’t be carrying the company by themselves, and the bandwidth bill must have been lowered a lot to make the company profitable.