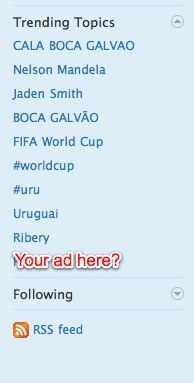 Twitter will open up another slot to potential advertisers soon.

The company is set to test “Promoted Trends,” which will allow marketers to put their own terms into the list of trends that Twitter shows on the bottom right-hand corner of its homepage. If users click on any of the trends, they’ll be routed to a Twitter search results page for that term.

Such an ad might go for “‘tens of thousands of dollars a day for exclusive placement,” according to AllThingsD’s Peter Kafka. It’s not clear whether the ads would be interest-targeted to specific groups of users or whether they would be uniform for every visitor.

It’s also uncertain how Twitter’s metric of “Resonance,” which analyzes how well a commercial message is being received and shared by users, will be applied to Promoted Trends.

Twitter spokesperson Sean Garrett said that since the company hasn’t tested trends yet, it wasn’t going to get into details on pricing models.

Garrett told AllThingsD that “Promoted Trends” was part of several tests the company was undertaking:

“As we have always said, we plan to test different advertising and promotional models in these early stages of our monetization efforts for both user and brand value. As part of this effort, we will likely test trends clearly marked as “promoted” for an undefined period of time. Assuming that we do, during this test, there will only be one visible at a time.”

This would be Twitter’s second type of ad offering on top of Promoted Tweets, which are commercial messages that will sit atop Twitter search results for relevant keywords. With 190 million unique visitors, Twitter now has the eyeballs to start attracting large brand advertisers. And with about $160 million of funding raised, now’s the time the company has to prove it can rake in the dough.