Social oversharing network Twitter has launched a new service that spits out HTML code for embedding a specific tweet into another Web page outside Twitter. Compared to the site’s simple, short text tweets, its quotes are a daunting barrage of HTML. Allegedly, that will change.

At noon Tuesday in Twitter’s hometown of San Francisco, it was impossible to get through to Twitter’s writeup or to the quoting service itself, named Blackbird Pie. By reloading a lot, we managed to get the screenshot below.

You can use the service manually, by pasting in the URL of a specific tweet and getting back from Twitter a paragraph of HTML code that will embed what looks like a screenshot of the tweet, but is actually HTML with cut-and-paste-able text and live links rather than an image of the words.

What’s more important is that software and website developers will be able to build in the quote service to, say, the WordPress blog editor VentureBeat and The New York Times use. It would be great to be able to enter part or all of a tweet’s URL, and have a replica of the tweet appear in the middle of another webpage to illustrate an article, prove a point, or deliver a punch line. (Right now, WordPress removes Twitter’s HTML from my posts, unless I use yet more HTML to wrap Twitter’s HTML. I’ll wait for the Internet to solve this problem for WordPress.)

Twitter’s official blog post on the system calls it “janky,” but Twitter employees have said they plan to shorten the output code to make it more manageable and less scary. 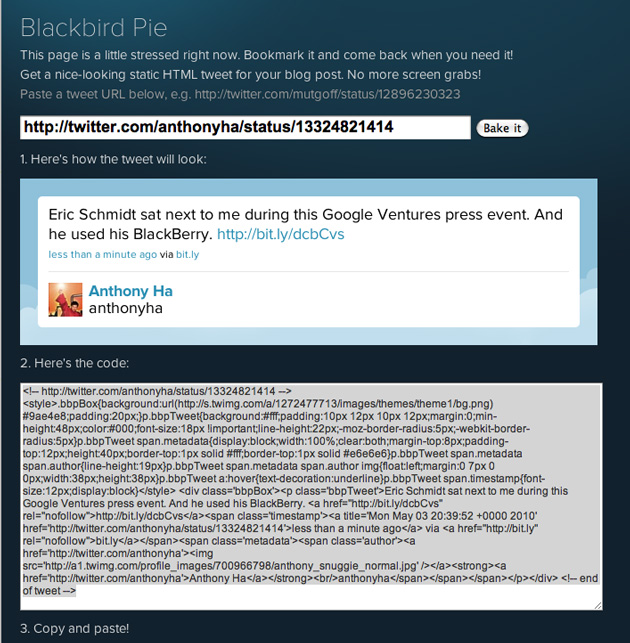