But it’ll only work on Samsung tablets, at least for now.

“While we’ve long offered a mobile app for Android users, we’ve not yet provided an app that is optimized for Android tablets –– until now,” Twitter said in a post announcing the new app. “The landscape view fills your screen with Tweets, conversations, Trends, accounts to follow, and more.” 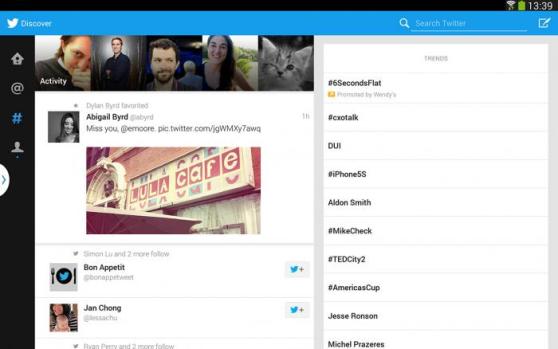 Tweets expand to show photos, videos, and previews of articles, Twitter said, and you can further follow stories by viewing them in a browser embedded within the Twitter app.

The partnership with Samsung is interesting, but somewhat odd.

Via that partnership, Twitter has enabled some Samsung-specific innovations, such as simultaneous multi-app views, which allows you to have Twitter open as well as another app, such as a web browser. In addition, Samsung will offer a Twitter widget that “brings content directly to your tablet,” such as breaking news, sports, and photos. It’s a feature that’s faintly reminiscent of Facebook Home, which aims to make your mobile device social at its core. 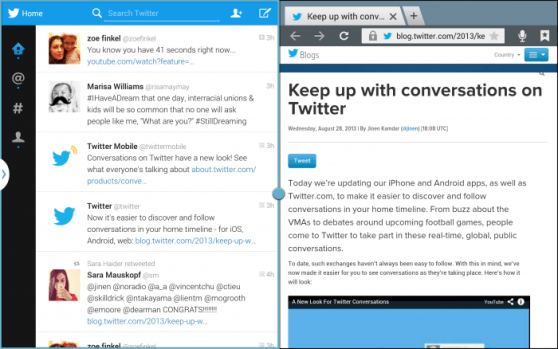 Another Samsung-specific innovation is the ability to annotate images in tweets, using Twitter “as your canvas to create and tweet colorful illustrations,” the company says. You can use your finger or Samsung’s S-Pen.

The app is available on Samsung’s Galaxy Note 10.1-2014 Edition, and it is coming soon on other Samsung tablets as well. It will be coming for other Android tablets as well, but only “by the end of the year.”

I find it odd that Twitter would go Samsung-specific on this initiative.

Twitter users with other kinds of tablets — Kindle Fire, anyone — might want to use Twitter on their tablets as well. And while Samsung has been more successful than most at Android tablet sales, it is far from the only game in town. Twitter, you would think, runs the risk of alienating Android users who have purchased other company’s tablets.