Available in web, Mac, PC, and Chome app versions, TweetDeck shows your timeline, interactions, messages, and top activity among those you follow. It also allows you to manage multiple accounts, schedule tweets, and manage your lists and favorites, all within customizable columns.

The new updated TweetDeck will have a dedicated Tweeting panel which will allow you to tweet to multiple accounts simply by selecting an account avatar and typing in your tweet: 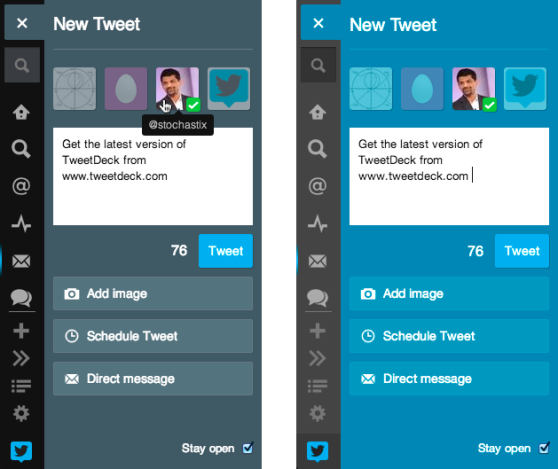 One very handy feature that Twitter is also adding is an image preview. That’s something you don’t get on standard web Twitter: you can select an image, but you don’t really know what it will look like until you click Tweet and upload it. Now in TweetDeck, you’ll get a little image preview, similar to Facebook’s status update preview, before you click Tweet and push an image out to the world.

That should help avoid some accidental exposures. 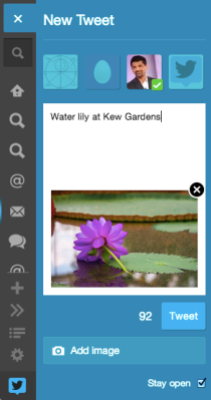 An interesting update that uses Twitter’s link-shortening capabilities will short URLs to 22 characters, but keep the original URL shown, which is useful and friendly. The full URL will also be shown in TweetDeck, which means you’ll always know what you’re clicking on.

Finally, Twitter is also adding features from its other platforms such as autocompletion of hashtags and usernames, so you won’t have to type the entire phrase.

The updates make TweetDeck something startling close to what social media management tools such as HootSuite offered when starting out: multiple account management, tweet scheduling, and a more information-dense way of navigating, sorting, and searching all the data that shows up on Twitter. HootSuite and other tools have since added far more options and features, of course, but TweetDeck is still not a bad budget Twitter management tool for brands or small business.

The changes will first be available on the web, and then trickle down to Twitter’s Chrome, Windows, and Mac apps.