In its latest earnings release, Twitter once again lost monthly active users, but the company says increases in revenue and “monetizable daily active users” show that its “long-term strategy is working.”

In Q4 2018, Twitter reported 321 million MAUs, compared to 330 million during the same time period last year. That was roughly what Wall Street expected.

Twitter last reported 326 million MAUs in its Q3 earnings report. The company has lost MAUs for the past two quarters, which it attributed to Europe’s implementation of GDPR and ongoing investments in improving the health and safety of the platform.

The company also said it will no longer start breaking out monthly users after Q1 2019. Rather, it will start reporting monetizable daily active users going forward — defined as “Twitter users who log in and access Twitter on any given day through Twitter.com or our Twitter applications that are able to show ads.” The company reports this metric as 126 million for Q1 2018. This is the first time Twitter has broken out some semblance of daily active users for multiple quarters — though it has been saying for the last several quarters that those users have been growing. Here’s a slide from Twitter’s earnings deck to show how its monetizable daily active users have been growing. 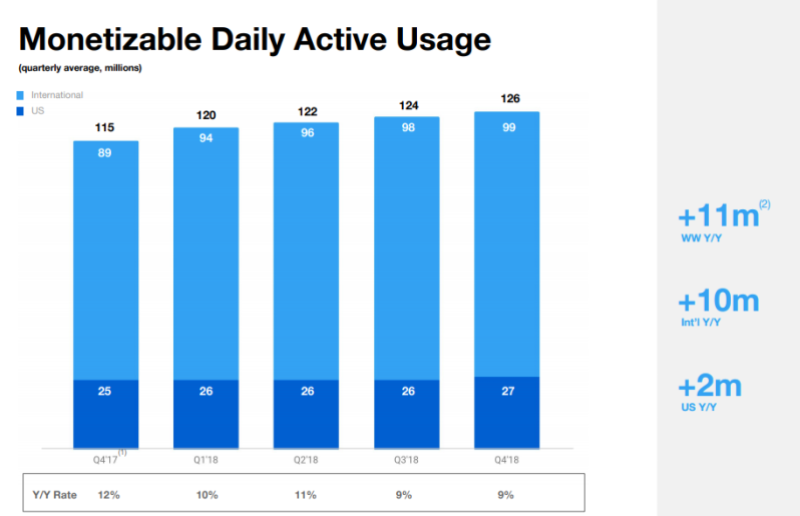 It’s not immediately clear how many of Twitter’s daily active users might not being seeing ads and thus aren’t “monetizable.” Twitter’s vice president of global communications did Tweet that TweetDeck users, as an example, were not included in mDAUs. CFO Ned Segal emphasized on company’s earnings call that Twitter believes mDAus “may not be comparable to current disclosures from other companies.”

The company netted $909 million in revenue this quarter, about a 24 percent year-over-year increase. That beat Wall Street’s expectations of $868.1 million. Advertising made up the bulk of Twitter’s revenue at $791 million — of that, video ads were its fastest-growing ad format. Twitter’s GAAP net income for the quarter was $255 million.

“2018 is proof that our long-term strategy is working. Our efforts to improve health have delivered important results, and new product features, like a single switch to move between latest and most relevant Tweets, have been embraced by the people who use Twitter,” said CEO Jack Dorsey. “We enter this year confident that we will continue to deliver strong performance by focusing on making Twitter a healthier and more conversational service.”

Twitter did caution shareholders that it expects expenses to rise next quarter and that total revenue will drop to “be between $715 million and $775 million.” That’s likely why shares were down in pre-market trading.