Politicians the world over can breathe a huge sigh of relief today, as news emerges that Twitter has pulled the rug from under Politwoops.

A product of “digital transparency” organization Open State Foundation, Politwoops emerged as a key tool for journalists and opponents looking to track the deleted tweets of politicians. While many of the tweets it saved for posterity were dull, it also helped shine a light on regrettable utterances and opinions from political leaders.

OSF confirmed yesterday that Twitter had killed the API Politwoops relied on to aggregate deleted tweets in all 30 countries it operated in, though this should come as little surprise — Twitter first scythed the API in the U.S. back in May, saying that preserving deleted Tweets violates the developer agreement.

While many see deleted tweets as a key process in holding politicians accountable for their statements, it seems Twitter disagrees. Citing a statement it says it received from Twitter, a OSF press release notes that Twitter cut off the API once and for all in every Politwoops territory, after a “thoughtful internal deliberation and close consideration of a number of factors.” 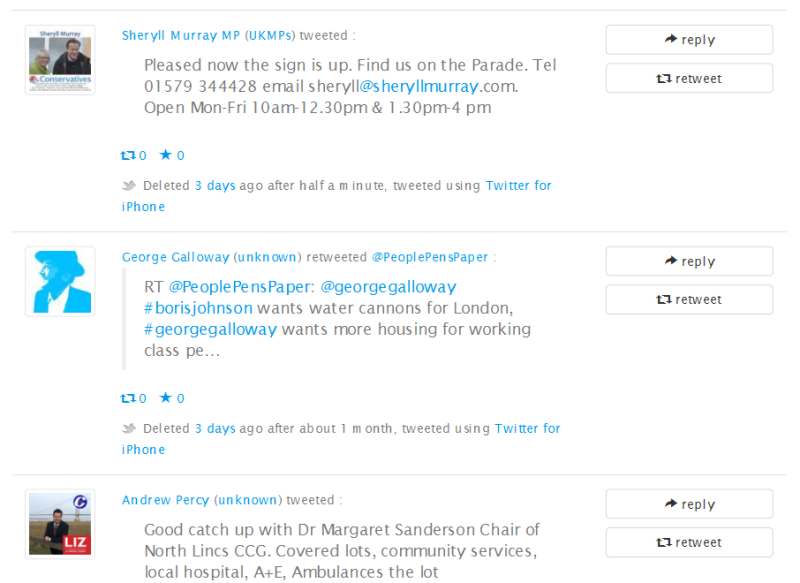 Twitter argues, according to OSF, that politicians are no different from any other user — people have the right to delete retweets or personal comments from the social network.

“Imagine how nerve-racking — terrifying, even — tweeting would be if it was immutable and irrevocable?,” the Twitter statement reads. “No one user is more deserving of that ability than another. Indeed, deleting a tweet is an expression of the user’s voice.”

That’s all very well and good, but many would argue that this lets politicians erase anything bad they’ve said from a public record, a privilege generally not afforded in other mediums. Indeed, Twitter has often sought to align itself with the media fraternity, be it newspapers, TV companies, or other broadcasters. But generally, anyone passing comment through these channels have little recourse to backtrack.

“What elected politicians publicly say is a matter of public record,” said Arjan El Fassed, director of the Open State Foundation. “Even when tweets are deleted, it’s part of parliamentary history. These tweets were once posted and later deleted. What politicians say in public should be available to anyone. This is not about typos, but it is a unique insight on how messages from elected politicians can change without notice.”

In other words, this latest move isn’t just about protecting politicians’ rights to delete a controversial comment, it also undermines the ability to hold politicians accountable if their messages or “public position” changes over time.

It’s safe to say that Twitter is at least partly motivated here by a desire to keep politicians using the platform — if they fear a tweet they delete will automatically be saved and scrutinized, they will be less likely to use the platform. Faced with mounting pressure to grow, Twitter needs all the public-facing friends it can find.

While this doesn’t necessarily prevent all deleted tweets from being preserved (we’re counting on you, screenshots), it does make it much harder to automate. This means that many potentially controversial nuggets will slip away into the foggy ruins of time. However, OSF said it will “continue to explore and engage with others to keep public messages by elected politicians visible.”

Politwoops came to fruition following a hackathon in the Netherlands way back in 2010, and subsequently launched in more than 30 countries, automatically tracking the Twitter accounts of elected politicians. Last year, it also launched Diplotwoops, covering diplomats and ambassadors, and this has now been closed off too.

“The ability to delete one’s Tweets – for whatever reason – has been a long-standing feature of Twitter for all users. We built into our Developer Policy provisions a requirement that those accessing our APIs delete content that Twitter reports as deleted or expired.

From time to time, we come upon apps or solutions that violate that policy. Recently, we identified several services that used the feature we built to allow for the deletion of tweets to instead archive and highlight them. We subsequently informed these services of their noncompliance and suspended their access to our APIs.

We take our commitment to our users seriously and will continue to defend and respect our users’ voices in our product and platform.”

Source: Open State Foundation (via The Next Web)