With the U.S. presidential elections a little more than a year away, Twitter has introduced a way for candidates to solicit donations through a simple tweet. 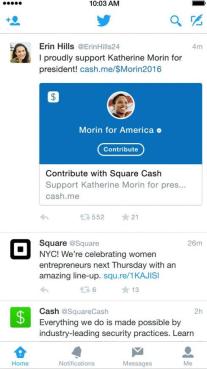 Partnering with Square for the initiative, Twitter is pitching this tool as the “fastest, easiest way to make an online donation, and the most effective way for campaigns to execute tailored digital fundraising.”

When a supporter sees the message, they can hit the “Contribute” button, choose how much they would like to pay, and set up their payment card. This data is then saved for any future donations a user would like to make.

The latest partnership between Twitter and Square is about as natural a tie-up as you could find — Twitter co-founder and “interim” CEO Jack Dorsey is also the co-founder and CEO of Square. It was a no-brainer, really.

Twitter has long transcended its roots as a simple microblogging service, and has been used in the past by third-party services to help charities receive donations. Twitter itself has been actively pushing to align itself with the political sphere, launching tools and pitching the service as the perfect medium for connecting the powers-that-be with potential supporters.

Last month, Twitter shuttered a service called Politwoops that saved politicians’ deleted tweets and made them easy for anyone to find. The closure ignited some criticism, with many claiming that by closing the API access to Politwoops, Twitter was letting politicians whitewash things they’ve said in public.

There’s little question that this latest launch should go some way toward helping candidates raise money. The timing of the launch is notable, too, as it comes ahead of tomorrow’s Republican debate on CNN. You can likely expect a number of scheduled tweets from the candidates asking for your financial backing.