Twitter is going to offer some sort of new, for-fee service to businesses later this year, company co-founder Biz Stone confirms to the Wall Street Journal today. He says that the company has hired a project manager to spearhead this effort — perhaps new business development leader Kevin Thau is involved?

But as others have noted, what could Twitter possibly charge for? Big companies like Dell are using Twitter to do things like tell twitterers about discounts — for free — and so are many smaller companies. Free features like Twitter search already let companies easily track and respond to what people are saying about them. 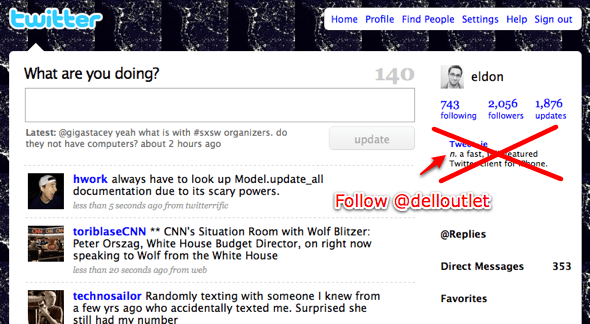 But helping Twitter figure out its business model is one of Silicon Valley’s favorite parlor games these days, so we’ll do our part and try to flesh out what Stone could be talking about here. Perhaps he means some sort of customer relationship management software, a way to help a customer service team at a company respond to numerous, simultaneous tweeted complaints? Sort of like routing software at a call center.

Or maybe it’s more advertising-related. One good copycat job has deserved another among Twitter and psuedo-rivals like Facebook and FriendFeed. After all, Facebook had status updates when Twitter launched; FriendFeed based itself off Facebook-like news feeds when it launched; and, Facebook’s redesign this month focuses on FriendFeed-like feed sorting and Twitter-like status updates. Drawing from that playbook, perhaps Twitter will create customizable brand pages, like what Facebook has been doing already? Facebook “pages” contain third party applications and analytics designed to help companies interact and learn more about its users. Pages are also integrated with other components of the site, like its targeted social ads — brands can pay for these ads and link them to their pages to attract more fans. Once a user becomes a fan of the page, information about those pages appear in Facebook users’ news feeds — brands get an ongoing connection to users. Brands also get a private interface so they can see user traffic, the impact ad spending and other information that might convince them to pay Facebook more money for the service.

Perhaps Twitter could offer some sort of integrated advertising service like this? After all, it has begun running text advertising in its home interface, directing users to its own features, and now to some third-party ones. Perhaps we’ll see branded Twitter accounts appearing in the same way, like an ad telling people to follow Dell’s twitter account in order to get special deals? Whatever the for-pay services turn out to be, the company is studying third-party initiatives closely and intends to work with them instead of compete against them, Stone says.

What’s somewhat surprising is that Stone is talking about some sort of for-pay revenue model and not others. Many of us are most intrigued by the idea of Twitter running contextually relevant advertising next to its search results; Twitter results provide real-time information about what’s happening in the world, something Google doesn’t do. Real-time search ads are something Twitter could do uniquely well (unless Facebook becomes so much like Twitter that it can provide the same value, of course).

Or maybe Twitter is starting to throw the proverbial spaghetti at the wall to see what sticks. Twitter recently endorsed its first sponsored site, ExecTweets, in conjunction with advertising network Federated Media (which, disclosure, also sells ads for VentureBeat). Microsoft is paying Twitter and FM to run ads on this site. And here’s more evidence for the spaghetti theory: The company has been growing its headcount fast and hiring product managers for its main product, search and its third-party developer platform. So hopefully for the company and its prognosticators, something will stick soon.