Since the launch of automated messaging and quick replies (also known as chatbots) on Twitter last November, most focused on customer service for companies like Pizza Hut and Airbnb or placing a TGI Fridays order, but they have also been used to register voters ahead of the 2016 election.

Today members of Blackbirds, a consortium of African-American Twitter employees, launched a bot for Black History Month, the first employee resource group at Twitter to create its own bot, a company spokesperson told VentureBeat.

To speak with the bot, send a direct message to @blackbirds. 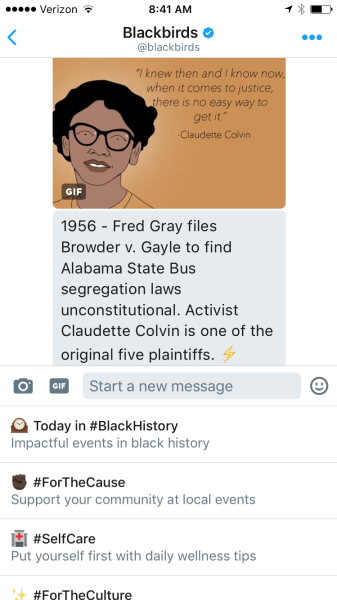 The @blackbirds bot can tell you about events in black history every day this month, alongside a combination of user tweets, curated moments, and GIFs.

As you may imagine, a fair deal of hashtags went into the making of the @blackbirds bot, like #ForTheCause, which connects you to events in cities like San Francisco, New York, Atlanta, and Washington DC. #ForTheCulture is a celebration of black culture.

“Twitter will be conducting a range of activities recognizing and giving back to the black community this month, such as relaunching the #BlackHistoryMonth and #BHM emoji, organizing employee-led events around the country, and dedicating the Twitter NYC #WallForACause to black culture,” a Twitter spokesperson told VentureBeat in an email.

The bot was built by members of Blackbirds, including Twitter brand planner Shelby Williams. One hashtag you may not have expected to come across: #SelfCare.

“There were over 300,000 tweets last year about #SelfCare on our platform, but health and wellness is something we want to continue talking about in the black community. We thought it would be a great way to give back,” Williams told VentureBeat in an email.