Twitter just announced that its new iOS 7-compatible apps are available for download from the app store, and that they contain some pretty interesting integrations with Apple’s new mobile operating system. 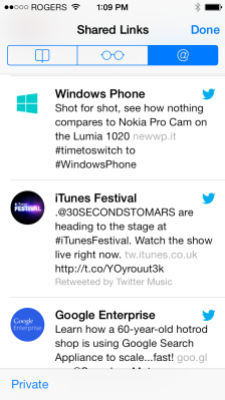 In particular, a new Shared Links section in Safari displays links that people you follow have recently tweeted. Which means that you can actually see popular and trending links from those you care about without even opening the Twitter app.

You can see an example to the right.

In addition, Apple included the Twitter #music station in iOS 7’s music app — which of course is only available for Americans at the moment, until Apple clears the digital rights in other territories. And, of course, Siri can search Twitter to help you find current information on people or topics you care about.

All of these are further examples of how integrated Twitter and Apple are becoming, and must look a little odd, if not annoying, from a Facebook point of view.

The app are available here.