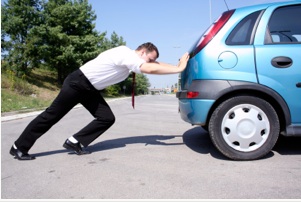 October numbers are in, and Comscore, Compete, Google, and Quantcast all agree: US traffic to Twitter.com reached a peak in July or August and has begun to decline slowly.

Twitter’s phenomenal growth over the past year can be attributed to factors like media coverage of celebrities on Twitter, Twitter founder Ev Williams’ appearance on Oprah, and Oprah’s joining the service. But its stalled growth and slight decline since September could indicate that interest in the service is limited and has reached its peak.

Nielsen reported in April that 60% of new Twitter users drop off after a month. In response to the objection that many Twitter users access the service solely via third-party applications or mobile phones, Nielsen found that Twitter drop-off rates were the same for applications. “There simply aren’t enough new users to make up for defecting ones after a certain point,” wrote David Martin, VP of Primary Research at Nielsen Online. Even though Twitter got a huge influx of new users over the summer, as the charts show, it seems most of these users didn’t stick around through the fall. Is it possible that Twitter doesn’t have the mainstream appeal to “make Twitter essential to everyone’s lives,” as Ev Williams stated in a recent BBC interview?

Of course, traffic to Twitter is not the only indication of its health, as Twitter users so adamantly informed Nielsen last spring. Let’s look at two more factors: search and traffic to third-party Twitter sites.

Using Google’s suggestion feature for Twitter, I plotted “twitter” and some of its leading search term suggestions on Google Trends. Like the web traffic data, the chart shows a decline in search volume in the past few months after a peak mid-summer. Searches for just Twitter outnumber searches for its associated terms by at least 53 to 1 (“twitter” vs. “twitter search”). 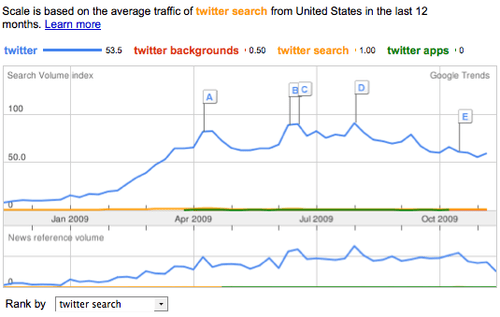 What about searches for Twitter apps? They appear to be holding steady after a drop off from the summer rush. Since search activity tends to happen pre-download, steady interest in the apps could indicate growth in usage. But the search volume for the apps is so small compared to search volume for “twitter” that new app users couldn’t likely have made up for the 60% of new users that drop off. 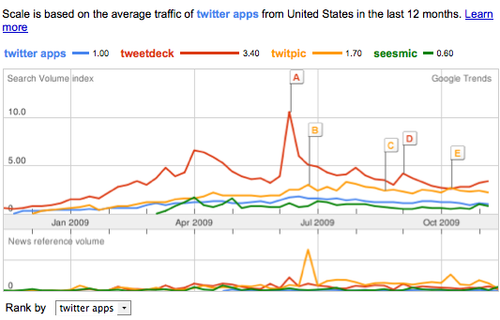 An examination of actual traffic to Twitter’s arguably most popular application, Twitpic, should be a good indication of Twitter adoption. Users must go to Twitpic.com to view a photo linked to in a Twitter post when using a desktop or mobile application. (Some newer browser-based apps like Brizzly show the photo in line with the Tweet, but adoption of these apps is still low.) Data extracted from Compete.com showed a correlation of 0.994 (where 1.0 is a perfect correlation) in unique visitor counts on Twitpic and Twitter over the past year. Unique US visits to Twitpic declined 3.5% from September to October, according to Compete.com.

Compete.com’s data shows that the September-October drop in visits to Twitter.com constitutes the loss of 496,336 users. Unique US visits in October to Tweetdeck and Seesmic (both sites that let users view and organize their Twitter, Facebook, and other streams in one place) combined were 583,696. (Most of the other application sites have too low visitor counts to receive reliable visitor count data in the measurement services.) It’s unrealistic to think that every single person who visited one of the app download sites downloaded an application and never visited Twitter again. Thus it’s hard to argue under any circumstances that Twitter is still growing in the US.

One anomaly worth noting, is that Tweetphoto, a service that lets you share photos on Twitter and Facebook, has grown substantially in the last few months, with more than a million unique visitors in October according to Compete. I talked to a few people about that number, and they think that Tweetphoto’s growth can be attributed to new users (in other words, people aren’t abandoning Twitpic for Tweetphoto). Thus Tweetphoto’s growth could be a result of increased adoption of photo sharing on Twitter.

With stalled growth, and no reliable business model to date, what is the future of Twitter and all of the related businesses like Seesmic (which has received $12 million in funding to date) that have built their entire business model on the back of Twitter? In the short three years since Twitter’s inception, companies like Twitpic (which display ads), pay-for download iPhone apps, direct marketers using Twitter, and social media consultants have developed potentially sustainable business models, while Twitter itself has been struggling just to keep the service up, and releasing new features at a snail’s pace. What happens if Twitter’s US growth has reached its peak?

LeeAnn Prescott is a research consultant and writer who covers internet traffic and online advertising trends. She is Principal at Research-Write, where she helps companies get the most of their data and internal knowledge base by conducting analysis and writing research reports, white papers, case studies and articles. She blogs at www.research-write.com.