There was an air of positivity in the buildup to Twitter’s second quarter earnings today, with the company’s share price popping in the wake of its last earnings results in April.

But the news out of Twitter towers this morning wasn’t great: Revenue fell 5 percent since the previous quarter, and the all-important monthly active user (MAU) metric remained static at 328 million.

Following Twitter’s surprising MAU growth of nine million users during the previous quarter — around 6 percent growth — this latest announcement may come as a surprise to the casual observer, though it was actually in line with analysts’ projections.

Digging down into the details, however, reveals Twitter’s MAUs actually declined in its native U.S. market in Q2. This graph from Twitter’s shareholder letter shows that its MAU for the U.S. in Q1 was 70 million, while it was just 68 million in Q2. 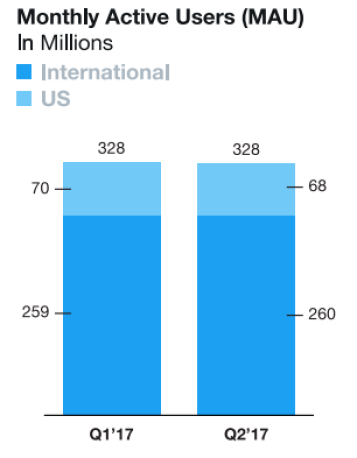 One of the core reasons Twitter’s stock price had jumped by around 40 percent since April was its user growth, and this was a key metric for Wall Street leading up to today’s earnings announcement. Twitter’s gloss is that its MAU is actually up 5 percent year-on-year (YoY), while its daily active usage (DAU) was up 12 percent YoY. But there’s no hiding from the quarter-to-quarter comparisons, which show DAUs were down by two percent and MAUs not only stalled, but fell in its home market.

At the time of writing, Twitter’s stock is down almost 10 percent in pre-market trading, and that tells you all you need to know about Wall Street’s reaction to these latest results.