In the last 30 days, Sony-owned PlayStation edged its lead with a third of all industry TV ad impressions, while Nintendo extended its market share at second place, Xbox fell from third to fourth, and chart newcomer Riot Games joined at No. 5. 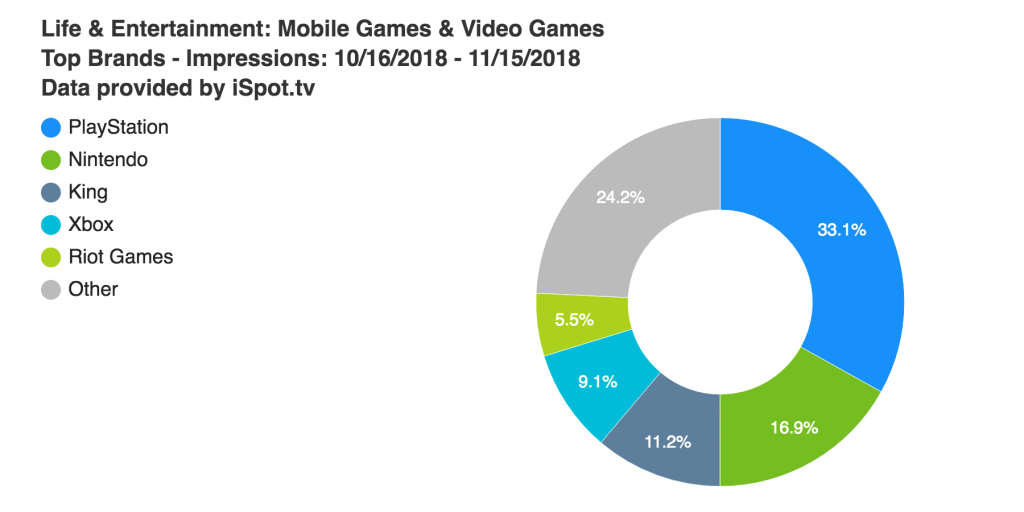 Below are the top five most-seen gaming industry TV advertisers from October 16 through November 15.

Overall TV ad impressions increased again for the gaming industry, up by over a billion impressions to nearly 4.5 billion from the previous period’s 3.2 billion, with 29 brands spending an estimated $78 million on 98 commercials that ran over 18,900 times.

PlayStation maintained its first place spot again with almost 1.5 billion impressions from 13 commercials that aired over 3,200 times. The Red Dead Redemption 2 spot “Nothing Means More” earned the most impressions with 694 million. Top impressions for PlayStation came from sports-related programming including the NFL, NBA, and college football, with top networks including ESPN, Fox, and NBC.

King, new to the top five from last month, took third place with 499.4 million impressions. It aired just two spots nearly 2,600 times, with the majority of impressions (482.5 million) coming from the Candy Crush Friends Saga spot “Sweeter Than Ever.” King received the most impressions across programming including NCIS, GMA Day, and The Bold and the Beautiful, while the top networks were Hallmark, CBS, and Investigation Discovery.

Xbox fell to the fourth spot this time with 404.2 million TV ad impressions from five ads that ran over 1,500 times. The Fallout 76 spot “Wouldn’t It Be Nice” featuring song by The Beach Boys was King’s most-seen commercial, earning over 318.3 million impressions. Top networks for Xbox were ESPN, NBC, and Fox, some of the programs generating the most impressions included the NFL, NBA, and college football.