Education experts are putting pressure on schools to introduce students to programming concepts. Teachers can now access a slew of new apps and online tools, which have emerged in recent years to teach children to code. Tynker is one of the best known of the bunch, as it’s specifically designed for classroom and at-home learning. 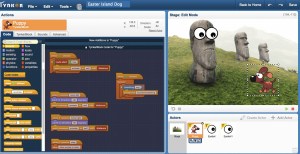 Above: The tasks in Tynker’s lessons are kid-appropriate

On the Tynker website, parents or teachers can enroll students to access a variety of web-based course content, such as games, quizzes, and interactive tutorials. Parents pay between $30 and $50 per course. Rates for schools vary depending on the content and classroom size.

Tynker claims its online learning service is used by teachers in 8,000 schools across the United States.

In its first year, Tynker has yet to release any mobile applications, despite the persistent demand from parents. But the startup plans to rectify that at the upcoming South by Southwest (SXSW) festival in Austin, Tex. On March 3 at SXSW, Tynker will launch its iPad application.

Tynker’s goal is to introduce children to programming concepts, and not to make them experts in JavaScript by first grade. Tynker instead developed its own visual programming language, which is focused on bringing better science, technology, engineering, and math (STEM) education tools into classrooms.

“Programming is one of the most valued skills in the 21st century. In which case, no age is too early to learn,” the Tynker team wrote in a blog post.

The startup launched in April of 2013 with a sizable $3 million in seed funding from 500 Startups, NEA, Felicis Ventures, and a slew of other angels and institutions.

We’ll update you in March with more details about the iPad application.