After a lull in the third quarter, acquisitions took off in the entertainment, media, and communications sector, according to a report by accounting firm PricewaterhouseCoopers (PwC).

The sector generated its highest deal volume for the entire year in Q4, and it was also the highest deal value in almost three years. The biggest deal was AT&T’s pending acquisition of Time Warner for $85 billion. It’s a marriage that crosses sectors, bridging a telecommunications company with a huge entertainment and media creator. 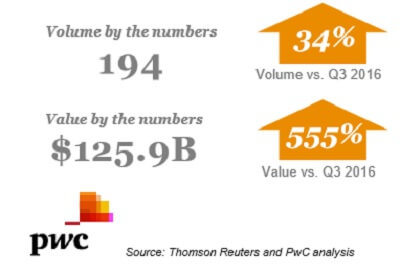 Above: Deals were hot in Q4.

There were six other megadeals (valued at more than $1 billion) in the sector during the quarter. Five of the deals were in communications, and two were in film and content.

Despite continued uncertainty around the political environment and the role of regulation in 2017, PwC said it expects merger and acquisition activity will continue to reflect the trends that prevailed in the fourth quarter.

The announced deal value reached a two-year high of $125.9 billion, driven by industry transformative deals in the film and content and communications subsectors. 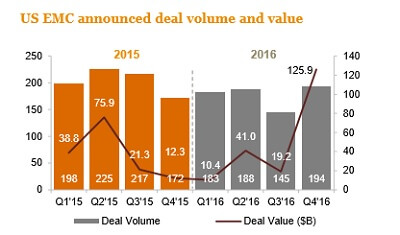 Above: The past two years of deal history in communications, media, and entertainment.

Advertising and marketing continued to lead the way in terms of deal volume. All subsectors, except for cable, had volume growth in Q4 2016 versus Q3 2016.

“The transformative deals that continue to resonate throughout the EMC sector are beginning to bifurcate the haves and have-nots, leaving certain players re-evaluating their strategy or existing portfolios and how they deploy capital in the market,” said Bart Spiegel, partner for entertainment, media, and communications at PwC.