Uber is in the market of helping you get from point A to point B, regardless of whether you’re using its app. That’s the main benefit of its rides-based API that was released in March, and so far, it seems to be meeting the company’s expectations. The company has not only been participating in hackathons, it has also been hosting them, encouraging developers to build what it calls “moving experiences.” 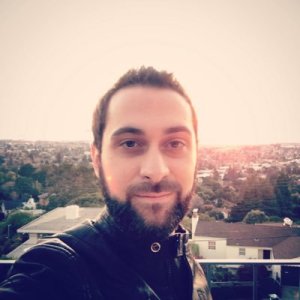 Above: Uber’s head of product for its developer platform, Chris Saad

Simply providing a service that transports people around isn’t enough for a company of Uber’s scale and appetite. It also wants to become a platform, along the lines of what Box and Slack have done in their respective spaces. By having an API, Uber can further differentiate itself from its nearest competitor, Lyft, which doesn’t currently have an open feed. This tool will give Uber the ability to reach beyond its own app and provide transportation support to developers.

So what’s next for Uber? VentureBeat spoke with Chris Saad, the company’s head of product for its developer platform, to find out how far along the API is and learn more about the vision behind it.

Just how is the on-demand car service helping fill a so-called “intent to ride” void within third-party apps?

“It’s about closing the gap from where your users are and where you want them to be,” Saad said in the interview. “It’s about building moving experiences getting you around. This has been a core idea that has been iterated on for the past six months. If you’re a user that needs to be somewhere else, the physical distance from where you are needs to be vacuumed out. Making the user’s life as easy as possible by closing the gap has been a key thing the API has been doing in the last six months.”

Although Saad mentioned that the API has been around for six months, he’s only referring to its public availability. In 2014, Uber began exploring opportunities to make its on-demand car service available through more apps. The company started with 11 launch partners, including TripAdvisor, OpenTable, Starbucks, and United Airlines. These were mostly strategic partnerships, similar to the move the company made with Google Maps. Since Saad came on board in April, his focus has been on making sure that the ride API is suitable for a developer working out of their dorm room, using it at a hackathon, or incorporating it into their startup product.

So far, Uber said it has developers in the “high thousands” building apps powered by its API. We inquired about specific numbers, but Saad declined to comment, beyond saying the total was less than 10,000. “This has been year one and only just the beginning,” he remarked.

Above: Screenshot of apps that are using Uber’s API.

Some of the earliest integrations include Rally, an app that lets you organize events with your friends; Teleport, which lets you summon an Uber and have it sent to your friend’s location; enterprise messaging service Hipchat, which allows people to request an Uber from within a chat room; Slack; and Facebook Messenger.

Once a company has developed an API, the hardest thing to figure out is often how to boost adoption. It can be difficult to integrate with the new API, and difficult to make the public aware that it exists. For the former issue, Uber offers an SDK and has also recently launched a Ride Request button that developers can quickly add into their apps. As for the latter, the company has shifted away from providing credits as an incentive to use its service. Instead, third-party developers are paid in cash for every new user that signs up for an Uber account, something that Saad orchestrated when he joined the company. 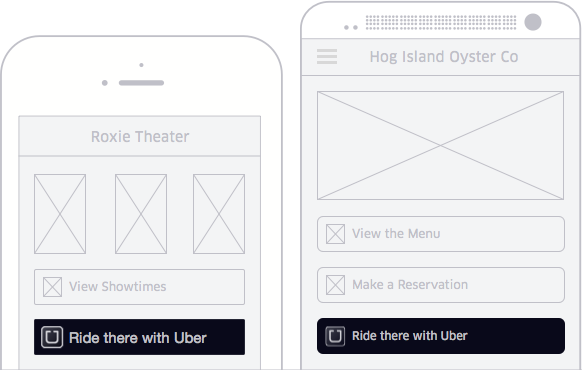 The future of the API

In 2016, Uber said it’ll be focusing on adding more improvements to its API, with updates coming early in the year. Saad declined to provide specifics, saying only that it would involve features that go beyond the “intent to ride” theme the company has already established. Additionally, his team will work on improving the app discovery process, while also doing more in growing markets like China and India. 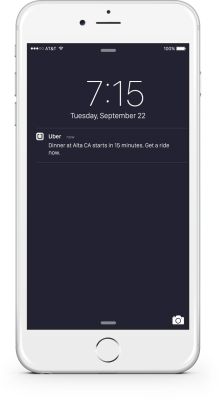 “We’ve seen a lot of appetite internationally in China, Brazil, Europe, and India, with developers hungry for us to provide support there,” Saad explained. “We need to do a better job localizing the API in other languages.”

For third-party developers in China’s and India’s markets, Uber has plans to double-down on its localization and will be participating in more strategic partnerships, as it has done with United Airlines and Google Maps. It will also reaching out to the community to participate in and sponsor hackathons.

Although the move toward India and China could be seen as a countermeasure to Lyft’s strategic alliance with Didi, GrabTaxi, and Ola, this doesn’t appear to be the case. Uber has already been in these countries for a while, and India happens to be the company’s second-largest market. “People are psyched about Uber. The adoption in China and India is crazy cool,” Saad noted.

Could we eventually see a developer fund, something akin to what Box and Slack have done in 2015? “Never say never,” Saad answered. He explained that his current focus is on making sure the existing platform is “compelling enough” that developers will build on it without any additional incentives.

And although Uber has branched out into other areas of transportation, including food delivery and a courier service, don’t expect an API for those features in the immediate future. Currently, Saad’s team is all about the rides, taking care of those first- and last-mile needs that arise on the spur of the moment. He believes that Uber’s API will also be a powerful presence in apps that help users accomplish day-to-day activities, such as getting to doctor’s appointments, making reservations, and more.

Now that Uber has the beginnings of a developer ecosystem, how will it treat app makers? Will it be as open as Facebook has been, or will it have a complicated relationship similar to Twitter’s? Saad is interested in maintaining a friendly and consistent partnership, and said it’s something he has spent a lot of time thinking about: “I’m clearly passionate about, and invested in, this idea of treating developers with empathy and with high bandwidth communication. Our incentives are in line with theirs, and we’re making thoughtful changes and iterations in their best interests.”

What the company will need to do is reassure developers that it’s around for the long-term. The ride sharing space is fraught with regulatory issues that sprout up every now and then, and of course with the company currently defending itself against a class-action lawsuit over how it classifies its drivers, this could make people weary about putting all their eggs in one basket. But Uber has a lot of resources at its disposal (read: funding) so it’s likely to remain around for a long while, unlike some others.

As Saad’s team continues to grow — there are currently between 20 and 40 people working on the API, although there are hundreds more pulled from across different teams — Uber will be working on scaling its API and adding new features. With the larger team, you can probably expect to see faster-paced development from the company, with the number of releases “going through the roof.”

“2015 was foundational. 2016 is going to be transformative,” Saad promised. “We can’t wait to see the moving experiences developers build with the Uber API next year.”