As part of its ongoing redemption mission, Uber is today introducing a new feature that checks if you’re OK if it thinks that you may have been involved in a crash.

The Ride Check feature, which is expected to roll out in the coming months, uses GPS and other sensors embedded in the driver’s smartphone to detect sudden halts and guess that you may have been involved in a collision.

When Ride Check is kicked into gear, both the driver and the rider will receive a pop-up message on their phone asking them if they’re OK — or whether they need any help. Assistance may involve linking you through to 911 or an Uber safety line, and there is an option to report a crash too. 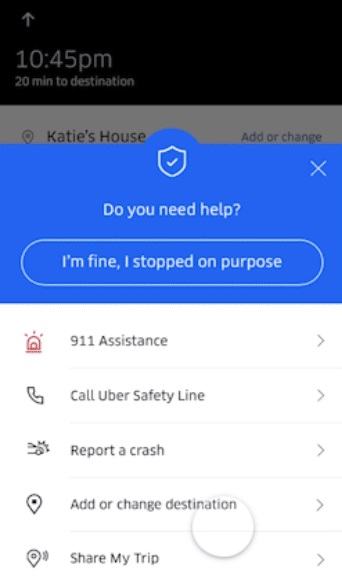 The feature won’t exclusively be used for crashes, though — if a car has stopped for an unusual amount of time while a trip is in progress, Uber may also initiate Ride Check, and other scenarios may cause Ride Check to open in the future.

This isn’t the first time Uber has tapped built-in smartphone sensors to enhance its service. A couple of years back, it announced that it was to begin using gyrometer and accelerometer data from phones to verify user feedback.

Today’s announcement was accompanied by a handful of other safety-related news.

Uber revealed that drivers will soon be able to go hands-free by using their voice to interact with the Uber app, meaning they can communicate with customers while on the road without having to pull over or manually interact with the app at speed.

Uber has anonymized rider phone numbers for a while already, while it has also been possible to use junctions rather than home addresses to request pickups. Feeding into this, the company today said that it will soon conceal pickup and dropoff addresses from drivers’ trip history records — so unless a driver writes down the information at the time, it’s more difficult for them to track down a passenger they previously served.

The final piece of Uber’s news today relates not to direct personal safety but account security. As with many online service providers, Uber offers two-factor authentication (2FA) as a way to protect accounts from being compromised by third parties — but this would usually only apply when logging in through a new device. In the future, Uber will allow customers to enable 2FA for every time they log into their account via SMS, while it will also support third-party authentication services provided by the likes of Authy and Google.