Uber announced today that it has expanded testing of its self-driving cars in Pittsburgh so that select customers will be able to ride in them for free.

“We’re inviting our most loyal Pittsburgh customers to experience the future first,” the company wrote in a blog post. “If a Self-Driving Uber is available, we’ll send it along with a safety driver up front to make sure the ride goes smoothly. Otherwise, it’s uberX as usual.”

“This pilot is a big step forward. Real-world testing is critical to the success of this technology. And creating a viable alternative to individual car ownership is important to the future of cities,” the company added.

Uber emphasized that there will still be a human behind the wheel and acknowledged that many people have concerns about the safety of the technology.

And in elaborating on its vision for self-driving cars, the company reassured users that even if self-driving technology were perfected, the Uber service would always be a combination of autonomous and human-driven cars.

“This is because of the limits of self-driving software and the skyrocketing demand for better transportation, which people-powered transport is uniquely able to solve,” the company said in its blog post.

In opening up the trial, Uber also allowed several journalists to try the service in advance.

Writing for the Los Angeles Times, Tracey Lien reported that each test car has two engineers riding along. One is there to take over driving when necessary, and another takes notes on the trip, which in this case, was largely uneventful.

“I was ready for the algorithm to screw up — to brake too forcefully, to accelerate too quickly, to drive too slowly,” Lien wrote. “None of those things happened. On both occasions, I got bored and started admiring the view out the window instead.”

The passenger in the back can monitor the trip on an iPad. 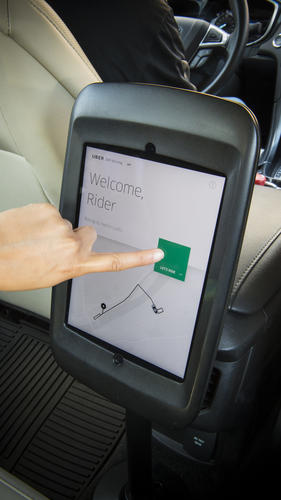 In many cases, the rides were handled quite cautiously.

“Later, when a parked car blocks our lane, the Uber driver takes over to go around it,” wrote Liz Reid for NPR. “The driver says the car could have navigated that situation, but in the interest of safety he decided to go manual. It’s a fairly straightforward situation that most human drivers could handle with no problem. And it really drives home the fact that autonomous car technology is in its infancy.”

While the technology is in its early stages, the company firmly believes that over the long run it will have a big social and economic impact.

“Of course, we can’t predict exactly what the future will hold,” Uber said in its blog post. “But we know that self-driving Ubers have enormous potential to further our mission and improve society: reducing the number of traffic accidents, which today kill 1.3 million people a year; freeing up the 20 percent of space in cities currently used to park the world’s billion plus cars; and cutting congestion, which wastes trillions of hours every year.”