The tussle between taxi drivers and new driving services like Uber has been well documented. In Paris, the turf war is ongoing, with Uber fighting a new French law that would protect traditional taxi services.

Less than two weeks after this law passed, French entrepreneur Kat Borlongan was attacked by multiple assailants in an Uber on route to Paris. According to Paris-based blog Rude Baguette, Eventbrite chief technology officer Renaud Visage was also in the car.

Borlongan summarized the rapid series of events on Twitter:

Got attacked in an @uber by cab drivers on strike near Paris airport: smashed windows, flat tires, vandalized vehicle and bleeding hands.

Attackers tried to get in the car but our brave @uber driver maneuvered us to safety, changed the tire on the freeway and got us home.

A spokesperson from Uber’s Paris office confirmed the incident in an email earlier today.

Uber said it strongly condemns “this severe violence,” and placed blame squarely on the shoulders of the taxi companies.

Taxi drivers are currently on strike to protest competition from new operators like Uber.

The full statement from Uber:

Unfortunately, I can confirm this morning’s incident in Paris occurred and we strongly condemn this severe violence two of our riders and our partner were confronted with.

First and foremost, we are relieved that all involved are safe and ok. Also, we would like to praise our partner who has shown great courage and professionalism, focusing on getting his customers out of a very challenging situation as swiftly as possible.

That the taxis chose to use violence today is unacceptable, that they chose to strike is their business. However, Parisians also have a choice when it comes to moving around in their cities, and today’s incident will certainly not tempt Parisians into choosing a taxi for their next ride. Safety, reliability and choice, not violence, are what continues to draw customers towards private hire vehicles. 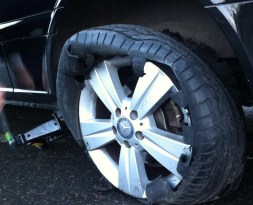 Rude Baguette shared a photo of the incident, in which a window appears to have been smashed and two tires slashed.

Borlongan said attackers tried to enter the car, but their Uber driver maneuvered them to safety.

@nobr_ Thanks Nicolas! We’re fine. Grateful that our @uber driver was cool-headed and that the doors were locked.

Borlongan’s claim that taxi drivers were responsible for the attack has not been confirmed by French police.

The taxi union successfully pushed for a law that all taxi apps must wait “at least 15 minutes” between taking a reservation and picking up a passenger.

But this regulation hasn’t prevented the rapid growth of Uber and other online transportation services in Paris. The Wall Street Journal reports that Paris is now one of Uber’s two biggest markets outside of the United States.