Uber recently launched two pilot programs in several American cities. One garnered a lot of press; the other one not so much. But it’s the second program that is ultimately going to resolve Uber’s $2.4 billion burn problem.

You probably know about the first launch. Right now, there are self-driving SUVs carrying Uber customers through the streets of Pittsburgh. We all knew about the semi-autonomous Tesla technology, but still. Suddenly a five year technology adoption time frame got collapsed into five months! Amazing.

The second program doesn’t feature ex-Carnegie Mellon researchers in tricked-out Volvo XC90s, but in my opinion it’s much more important for the company’s future. Uber is testing a flat-rate subscription service in six cities called “Uber Plus.”

Users can pay a monthly fee in exchange for bundles of reduced-rate trips with no surge pricing. In San Diego, for example, users can pay $20 to access a month’s worth of $3 UberPool rides or $6 UberX trips in designated areas.

In other words, Uber will cut you a deal on rides in exchange for steady business. The company may take a short-term profitability hit, but the goal is to gain long-term customer loyalty in a very young and turbulent market.

Look at how fluid the market is right now between Uber and Lyft. Here in the Bay Area, I’ll frequently toggle between the two services. Lots of the cars even feature both logos in their windshields. There’s very little brand loyalty on my part. 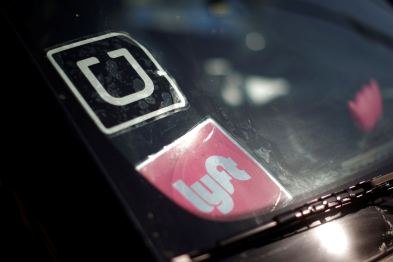 Above: A driver displays Uber and Lyft ride sharing signs in his car windscreen in Santa Monica, California, U.S., May 23, 2016.

Now contrast that with my Amazon Prime experience. All due respect to Jet.Com, but Amazon has my business — they hooked me with the free shipping, and now I’ve got music, movies, and all sorts of other services (and potential upsell opportunities). I’m not going anywhere.

In other words, Uber Plus is how Uber will ultimately avoid the costly ride sharing wars that caused it to lose $1.2 billion in just the first six months of this year.

Here Uber is obviously taking a cue from the rising popularity of subscription models, which are enjoying huge popularity in all sorts of industries: software, media, smart homes, connected devices. Microsoft CEO Satya Nadella calls them a “secular movement” towards recurring revenue-based customer relationships as opposed to transactional, anonymous sales.

When it comes to driving, nine in 10 Americans take cars to work, and more than three quarters of them drive alone. That’s a massive inefficiency waiting to be solved by a subscription-based loyalty program built around cheap, timely pool rides. Take care of that problem for me, and you’ve got my business for life.

Car ownership is expensive and onerous. When I was just out of college, my used car was a ticking pecuniary time bomb that threatened to wipe out my savings account at a moment’s notice. Vehicles spend 95% of their lifetimes just sitting there taking up space. The auto loan market is a gigantic $900 billion dollar beast.

Here’s the good news (unless you’re in the loan market): All those debts are going away. Instead of making monthly interest payments to some bank, you’re going to be paying directly for automobile transportation when you want it, how you want it.

Autonomous driving will ensure that cars are used much more effectively and that thousands of crappy parking lots go away. Subscription pricing means people will be able to budget far more effectively and finally tie a desired outcome (i.e. a ride) to a reasonable value. Put the two together, and you’re solving some glaring market and sustainability problems.

In 10 years when we’re all summoning our self-driving cars, they’re going to feel instantly familiar, with our favorite music playing, the lighting and air-conditioning just right, the seats adjusted perfectly. We may not be buying a new Ford, but we’ll be subscribing to a Ford experience.

I run a subscription management company and I talk to lots of automobile companies. They’re focusing on ways to compete and distinguish themselves against all comers (Google and Apple included), and loyalty programs are a big part of that equation. Just like what happened with Amazon prime, today’s novelty services will become tomorrow’s table stakes.

Tien Tzuo is cofounder and CEO of Zuora.