Ubisoft beat its guidance for the first half of the company’s fiscal 2017, but it is taking a conservative outlook for the rest of the year because it isn’t sure how the market will react to Watch Dogs 2.

Through the six-month period ending September 30, Ubisoft has generated $312 million (281 million euros), which is up 36 percent year-over-year. The company did experience an operating loss of $69 million (62 million euros), which is better than what it saw through the same period during its fiscal 2016. The company credits its strategies regarding digital gaming and providing ongoing support for major releases for contributing the most to its growth. Ubisoft also warns that Watch Dogs 2 is not doing the preorder numbers it thought it would. The publisher is cutting its full-year guidance despite its strong first-half report.

“Our excellent performance in the second quarter as well as the sharp improvement in our profitability during the first six months of the fiscal year are proof that we have gotten both our digital strategy and our approach to multiplayer games right,” Ubisoft chief executive Yves Guillemot said in a statement to investors. “The Crew, The Division, and Rainbow Six: Siege each have more than 10 million registered players, demonstrating that we are effectively executing our business development plan and moving towards an ever-more recurring model.”

In a conference call with analysts, Guillemot emphasized that the company is focusing resources on ensuring its games grow into something that people come back to for months. As an example, he pointed to The Division, which developer Massive Entertainment recently updated to version 1.4. Fans, many of whom were critical of the connected multiplayer shooter, have started raving about the new content in this patch, and this has led to an increase in the number of daily active and monthly active players. 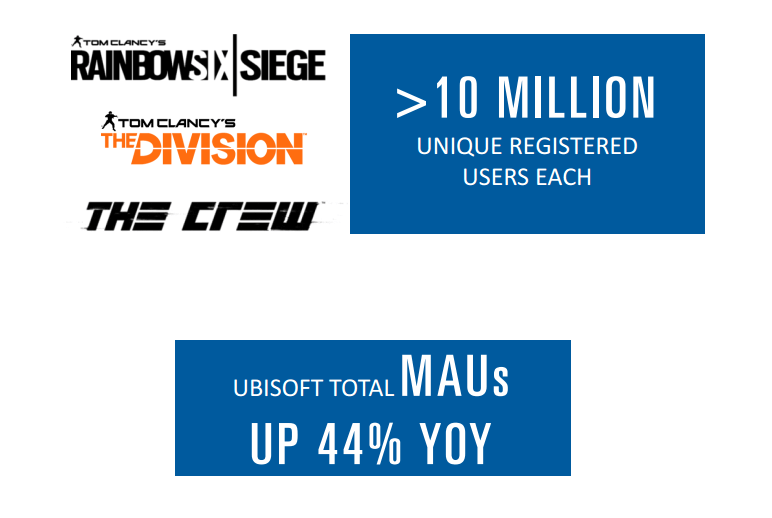 Above: The rate of monthly active players is up for Ubisoft, and it says it’s because it is bringing new content and support to its games on a consistent basis.

“All of our actions and initiatives are aimed at achieving this objective [of engagement],” said Guillemot. “We are creating powerful franchises that offer long-term visibility. Our multi-studios organization enables us to have regular game releases. And the live experiences for our consoles and PC games, including our investments in esports, encourage long-term player engagement. As a result, Ubisoft is well positioned to achieve very high value creation over the coming years.”

Of course, getting players to return to games means some are more likely to spend their cash on microtransactions. Ubisoft says it is already seeing the benefits of that.

“Thanks to the more favorable trends seen in the first six months of [fiscal 2017], we now expect digital revenues to represent approximately 40 percent of total sales for the full fiscal year and we have revised upwards our [operating income target].”

The open-world computer-hacking adventure Watch Dogs 2 is failing to generate as many preorders as Ubisoft was expecting, Guillemot said during his call with investors. That is likely one of the key reasons the company revised its full-year guidance down from $1.89 billion (1.7 billion euros) to a range of $1.79 billion to $1.86 billion for the 12 months ending March 31. Ubisoft explained that it was making this adjustment “to factor in more conservative sales projections for the second half” of its fiscal year.

At the same time, Ubisoft raised its guidance for its operating income from $255 million (230 million euros) to a range of $255 million to $278 million. It explains that dichotomy by pointing to the success of its digital business, which would inherently have fewer overhead costs.

Finally, Guillemot also alleviated investor concerns that Watch Dogs 2 could flop. He says that he believes gamers are uncertain about the quality of the sequel compared to the original. The CEO expects that many consumers aren’t preordering so they can take a wait-and-see approach and then jump in to buy it when they see positive reviews. That’s something that happened with Far Cry: Primal for Ubisoft in the last half of its fiscal 2016.

Regardless, the mystery around whether Watch Dogs 2 can deliver what gamers want is adding some drama to Ubisoft’s financials — especially in a year where the publisher does not have a new Assassin’s Creed.