Shareholders endorsed the leadership of Yves Guillemot, the longtime CEO of Ubisoft, as the French video game publisher held its annual meeting. But the threat from Vivendi, which has acquired enough shares to launch a hostile takeover of Ubisoft, still lingers.

Today, the shareholders approved by majority vote resolutions to appoint independent directors for Ubisoft’s board — a move that Yves Guillemot proposed. But Vivendi still holds enough stock to be a threat to Guillemot control of the company, which has one of the industry’s best portfolios of games such as Assassin’s Creed, Watch Dogs, Far Cry, Just Dance, Tom Clancy, and the Rayman, along a fantastic partnership with Nintendo for Mario + Rabbids: Kingdom Battle earlier this month.

The new board includes two new independent directors, Corinne Fernandez-Handelsman and Virginie Haas. Other members who were re-elected include Didier Crespel, Laurence Hubert-Moy, Christian Guillemot, Claude Guillemot, and Michel Guillemot. Now Ubisoft’s board has six out of 11 board members as independents, meaning they don’t have a strong financial or management connection to the company.

Before the meeting, Vivendi had about 25 percent of the voting rights, while the Guillemot family, which started Ubisoft decades ago, held 22 percent. If Vivendi goes over 30 percent ownership, it is obligated under French law to attempt a takeover of Ubisoft, which has a valuation of $6.4 billion. If Vivendi fails in such an attempt, it has to sell off shares to go back under 30 percent. Ubisoft’s 12,000 employees own about 6 percent of the shares.

Shareholders also approved the proposed extraordinary resolutions, resolutions requiring more than two-thirds of the overall vote, including a resolution giving employees the possibility, upon decision of the board of directors, to participate in capital increases. 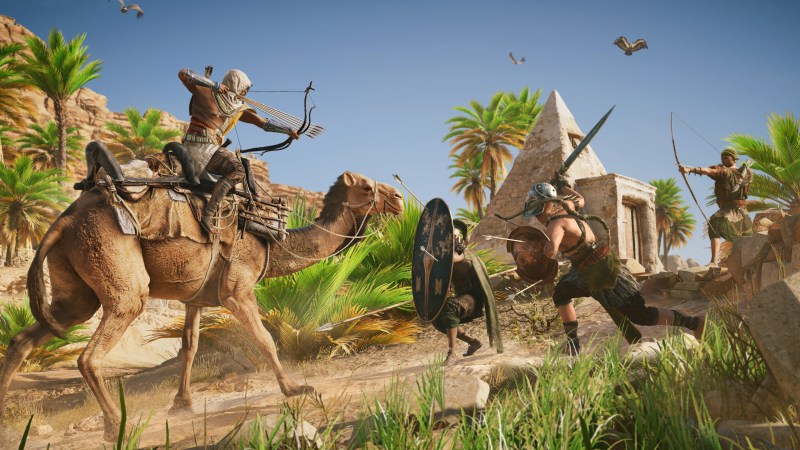 Above: Assassin’s Creed: Origins is one of Ubisoft’s major releases for the 2017 holiday season.

“We are delighted with the massive support of shareholders, which strengthens our determination and ability to defend the interests of all shareholders, and to pursue our strategy of growth and value creation,” Guillemot said. “Ubisoft consolidates its position in the industry among the world’s leading video game and entertainment companies.”

Vivendi abstained from voting its shares, as it did at the last annual meeting. But one of the resolutions did not pass because there weren’t enough votes to give the resolution a required two-thirds majority. Extraordinary resolution 31, which concerns the program to grant free shares to employees, was rejected. This means that Ubisoft won’t be as free to issue new stock to employees for free. And that could hurt the retention of Ubisoft’s key employees. Overall, the share price is up 74 percent in the past year.

Ubisoft spelled out its problem, saying, “Share-based compensation is an essential tool for recruiting and retaining top talent in the video game industry, and is a standard practice for competitive, modern, high-tech companies. Alternative solutions will be put in place to guarantee competitive compensation for talents.”

As such, Ubisoft management can say that Vivendi’s ownership of such a large block of Ubisoft stock is hurting the company — even if that ownership puts an upward pressure on the stock price. Vivendi did not offer any of its own resolutions, and it has not commented on the meeting. But if Vivendi holds on to any block of shares for two years, then it is granted voting control for those shares. So even by doing nothing at the moment, Vivendi’s percentage control can increase in the future. Based on current holdings, Vivendi is expected to grow its voting shares to more than 30 percent in November.