During a talk at Unite Europe 2017 Ubisoft showed off two previously unrevealed HoloLens game prototypes: Toy Soldier and Rabbid Rockets. Whether or not these games will become full projects remains to be seen. 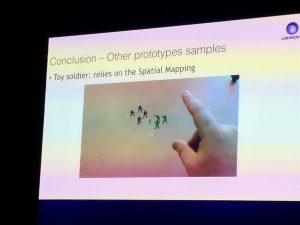 Above: Ubisoft’s Toy Soldier is an AR HoloLens prototype game.

At the event David Yue from Ubisoft led a talk titled “AR Prototyping for the HoloLens” in which both projects were shown. Prior to this event Ubisoft has only been associated with VR in the immersive technology space, having released Eagle Flight, Werewolves Within, and Star Trek: Bridge Crew all in the past 12 months. Then earlier this month at E3 2017 the global games publisher announced both Transference and Space Junkies as two new VR titles set to release within the next 12 months as well. Just Dance VR hasn’t resurfaced in a quite a while.

In the images above you can see snippets of what Yue was showing at Unite Europe this week. The first prototype, Toy Soldier, uses spatial mapping to let people interact with what appear to be realistic-looking army men atop a table. It takes the fun and excitement of setting up the little green men across a play space into AR, but brings them to life like never before in the real world before you. 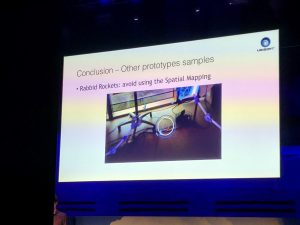 Above: Rabbid Rockets is one of Ubisoft’s game prototypes for Microsoft’s HoloLens AR headset.

In the second prototype shown, dubbed Rabbid Rockets, spatial mapping is not used and instead Ubisoft’s iconic rabbid characters are seen flying all throughout the air around the user. We haven’t really seen many robust game applications of the HoloLens just yet. Back when the device first released its initial dev kit Microsoft shipped it with experiences like Fragments and Young Conker, both of which were developed by Asobo Studio.

Upload reached out to Ubisoft for comment and additional information on these and any other HoloLens or similar AR projects.