“We screwed up our launch pretty badly, but we managed to recover from that.”

Richard Atlas at Clever Endeavor in Montreal, Canada didn’t mince words about the launch pains of his game, Ultimate Chicken Horse. It’s a competitive platformer (out now on PC) where up to four players can dynamically build their own levels as they play. The goal is to make it impossible for each other to get through the finish line.

“I’ve never been a huge gamer, but always got sucked in when I did start playing something,” he says. So there’s no World of Warcraft obsession here, but there is a fascination with the potential of games and a conviction that these games matter.

A background in mechanical engineering didn’t seem like a route to game design, “but the thing I liked about architecture was creating a space you can live in,” says Atlas. Games, and their interactive spaces offered that, opened doors, and presented opportunities.

“I had a game design document of 40 pages and I thought, ok, this will probably never be made, but I’ll find a team and in the incubator program, will try to make this work.” For Atlas, the point was the creation, and he was committed to that goal even when it wasn’t clear where or how far it would go.

It began by testing in small groups, graduating to larger gatherings. “This is like a marriage, we’re not going to just dive in. So, a game jam seemed like the best test of that,” says Atlas. And the test yielded positive results that invigorated the team.

“There were 20-30 people at a meet-up, and they liked it,” he says, “and then we went to an IGDA demo night with over 500 people…next was a Kickstarter with 1,100 people getting back us, so we thought we might have a thing.”

Among heavyweights like Square Enix and Ubisoft, “We got incredible feedback,” he says. But that feedback also changed the focus of the design as gamers wanted to see more multiplayer options that took advantage of Ultimate Chicken Horse’s DIY theme. Clever Endeavor ended up getting rid of a planned single-player puzzle mode in favor of adding online multiplayer support.

“We now needed a huge amount of refactoring of our code because it wasn’t originally designed this way,” Atlas says. 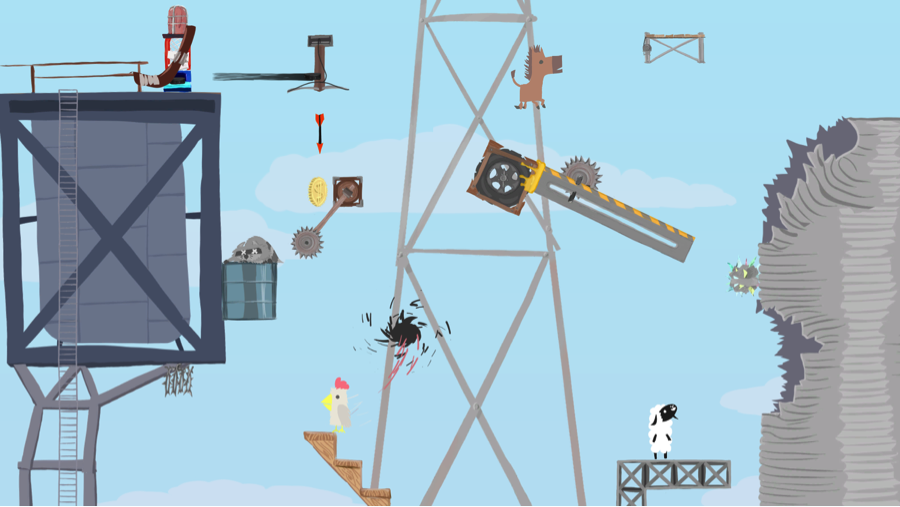 “Originally the game was turn-based…and that was from the game jam where you’d see the other player screw-up and you’d know what to do or what to avoid,” Atlas adds.

But over time, he gained a better understanding of what players were looking for, what they could do, and how long they would stay.

“People get overwhelmed when they have too much choice,” says Atlas about a game design philosophy that has endured for years.

“We prefer to give them smaller options at one time,” he says, and a huge design change involved making party mode — where players use a random assortment of obstacles to customize their level — the key focus. “There were some fundamental flaws in the design that we wanted to fix… people falling behind during a match couldn’t catch up. We saw that internally, brainstormed, and discussed,” he adds. 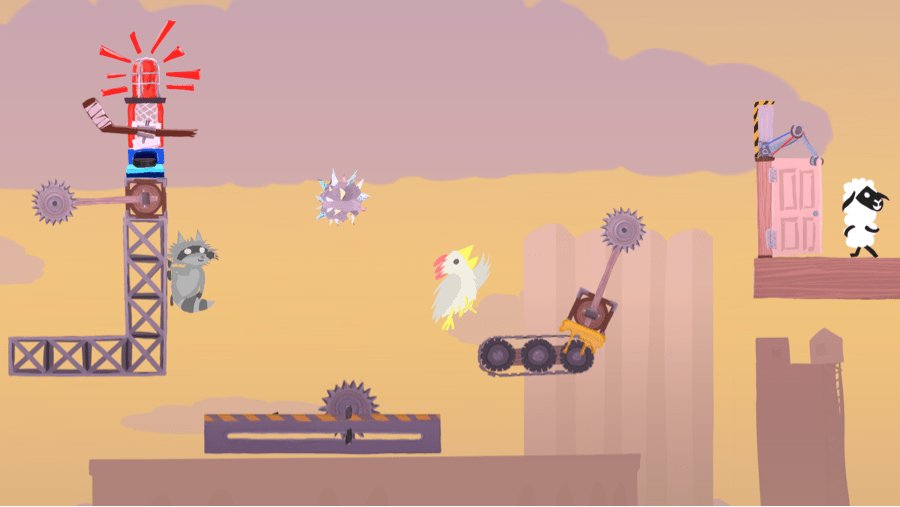 Above: It looks crazy, but it makes sense when you play it.

Between refining comeback points and elements that ensured the underdog could still have a chance at success, the game took on a new shape — one that resonated with gamers. “We’ve made design decisions… like a problem with our scoring system, so we come together and decide the best idea,” says Atlas.

And that’s a team of four people figuring out the details while they follow a Steam page that has hundreds of posts. “So we’ll go for a walk near our office,” says Atlas, “and just see what happens.”

There’s a joy to this that even a non-gamer like Atlas certainly understands, and who gets what the interactive medium can represent. And it’s what he and the team want to deliver, and spend their days and nights making sure it can.