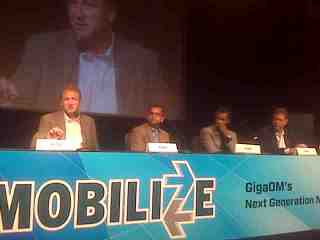 South Korea’s government has pledged to roll out gigabit ethernet to homes by 2012. Korea also plans wireless networks of one-tenth that capacity, or 100 megabits per second. Could Americans get some of that?

At this morning’s Mobilize 09 conference in San Francisco, panelists from the the worlds of broadband backbone, wireless networks and consumer services humbly spun big visions of a not-too-distant future in which networks are 100 times faster than today’s during a panel discussion dubbed Ultraband: A Fast Platform for Innovation.

“Latency is the real issue” on mobile connections, said panelist Rick Keith, senior director of strategy for Motorola’s Broadband Access Solutions team. “Facebook will want to have sub-half-second response times for keeping in sync.” That response, Keith said, is what will drive customer adoption, which is what leads to innovation.

Abhi Ingle, AT&T’s vice president for Industry and Mobility Application Solutions, said it would take “massive amounts of capital,” an investment twenty time the size of AT&T’s more-capacity spending this year. Instead of the $16 to $18 billion the company spent this year, Ingle estimates “$200 to $300 billion at today’s prices” would need to be spent on boosting America’s networks to the speeds South Korea has set as its targets.

Openwave president Ken Denman said, “The key will be an all-IP environment,” by which he means that all wireless and wired networks alike should move to the Internet Protocol type of network, rather than other network protocols. As more and more Internet Protocol networks, which are easy to connect, are used to connect everything, “everything that can be connected will be connected,” Denman said. Appliances, automobiles, homes — all networked. Connecting these things, Denman said, will probably grow demand for bandwidth faster than network operators will be able to add it.