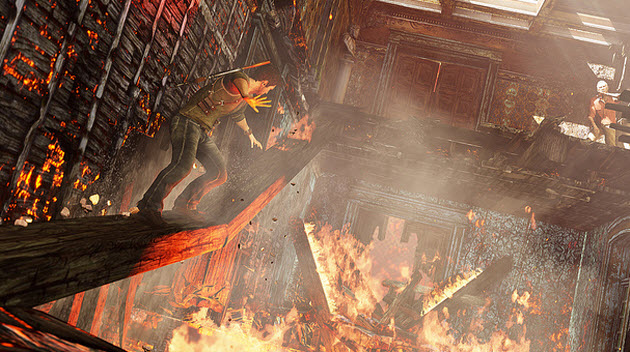 The team behind adventure game Uncharted 3: Drakes Deception is pulling out all stops to create a legendary cinematic experience — this time including stereoscopic 3D, which it demonstrated at the Game Developer’s Conference last week.

Uncharted 2: Among Thieves won numerous awards as the best game of the year in 2009. This demo shows that the Naughty Dog team that made the game for the PlayStation 3 wants to push the envelope even more with the newest game, which comes out this fall. If they succeed, then they could easily have game-of-the-year material again. And that would generate hundreds of millions of dollars for Sony.

The Naughty Dog team demoed a 3D-enhanced level that made players controlling the game’s hero, Nathan Drake, escape from a multi-story château that was on fire and collapsing. The level requires gamers to wear battery-powered 3D glasses — but it’s well worth the slight discomfort. The demonstration is gorgeous, even though there are a few slow-downs from time to time.

It’s one of two ways the industry has seemingly embraced to push the envelope with video games. Independent studios with smaller budgets are forced to come up with clever ideas and game mechanics to create popular and innovative titles. Studios like Naughty Dog — with titanic budgets and teams of people that surpass 200 — work to create more cinematic experiences that stretch the limits of the gaming console and what games can offer gamers.

Naughty Dog’s last blockbuster, Uncharted 2, featured a level where players were running along a moving train that was riding through the jungle. Just about every part of the scene was constantly moving and the game didn’t slow down at any point. The château scene featured loads of fire and falling pieces of wood as the house crumbled around the hero Nathan Drake and his partner Sullivan. It’s also just about as active as the train level in Uncharted 2, but it looks like the 3D engine might need a few minor tweaks before it comes out.

Naughty Dog also unveiled the game’s main villain, Katherine Marlowe. She’s the head of an ancient organization that is obsessed with recovering Drake’s ring, which belonged to explorer Sir Francis Drake — one of Nathan Drake’s ancestors. While Uncharted 2 featured a more militaristic enemy bent on achieving immortality, Marlowe is a little more subtle and seems a bit more sinister.