Uncharted 4: A Thief’s End’s newest story trailer is all about a dramatic choice that adventurer Nathan Drake faces in the what could be the final installment in the blockbuster series.

This game is probably the best thing that Sony has coming this year for the PlayStation 4, which has sold more than 36 million copies and has the potential to hit 100 million in this generation of gaming hardware, according to market analyst DFC Intelligence. The Uncharted series is a blockbuster that sells hardware for Sony, and Naughty Dog’s latest Uncharted 4, which debuts on April 26, looks like the best one yet. The Uncharted series has been perhaps the most successful game of all time on Sony’s platforms, and I maintain it’s all due to the clever blending of storytelling and action. 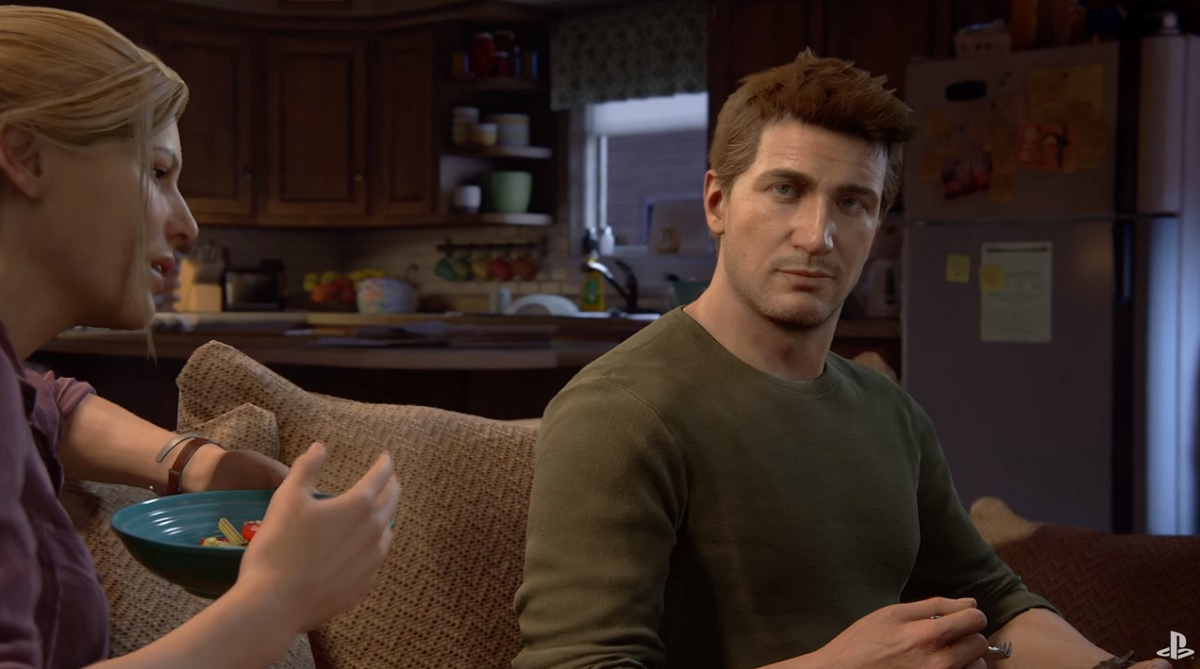 Above: Uncharted 4: A Thief’s End depicts Nathan Drake’s choice between his criminal brother Sam and his love Elena.

At least that’s what it seems like from the newest trailer. The tale of Drake is full of moral dilemmas, and in Uncharted 4, Drake has hung up his adventuring for a life with Elena, his on-again, off-again love who happens to be one of the best female characters in video game history, in my opinion. She pulls him back to the domestic life, and then Drake’s criminal older brother, Sam, shows up. Sam has been in prison a long time, and he’s still entranced with the life of adventure. Based on the trailer, he clearly pulls Drake away from Elena. Clearly, Naughty Dog is going for the emotional tug-of-war to hook the players, and then it will deliver the spectacular action, movie-like cinematics, amazing 3D graphics, and awesome travel destinations that the Uncharted series is known for.

In the start of the video, Sam says to Nathan, “We were meant for this, Nathan. You, me, together. We were destined for something great.” And later, Elena says, “If you’re done lying to me, then you should stop lying to yourself.”

While the Uncharted 4 trailer is impressive, it was not free of errors.

It turns out that Naughty Dog included a piece of art from competitor Ubisoft’s Assassin’s Creed IV: Black Flag (via Polygon). The trailer briefly featured a seaside landscape painting that was lifted directly from the Ubisoft game, and one of the artists who worked on Assassin’s Creed noticed this and mentioned it on Twitter.

@EscoBlades Look at that… At least they removed the character! ;) pic.twitter.com/7TGO0v6mna

Naughty Dog has since removed the video and replaced it with a new one that does not include any Assassin’s Creed art. The developer also issued the following apology:

In our eagerness to get the story trailer out, we made a regrettable mistake and didn’t thoroughly vet the art work used for an in-game painting. We’ve already updated the trailer. We hold all artistry in high regard and take full responsibility for having allowed this to happen.

We want to sincerely apologize to everyone at Ubisoft, the Assassin’s Creed team, the original artist, and our fans.

Sounds like an honest mistake … or maybe this is part of the mystery. I’m putting all my money that A Thief’s End is also “An Assassin’s Beginning.”

Updated at 12:35 p.m. Pacific: Naughty Dog has removed the Assassin’s Creed art and apologized to Ubisoft.

Update 10:54 a.m. Pacific: Here’s an embarrassment, as reported by Polygon: A Ubisoft artist noticed at 1:36 in the video, there appears to be some concept art taken from a Ubisoft game, Assassin’s Creed: Black Flag.