Sony’s Uncharted: The Lost Legacy is one of the big exclusives on the PlayStation 4, debuting on August 22. The Naughty Dog game is full of familiar puzzles, action sequences, and plenty of climbing, but the female lead characters take the series in an intriguing new direction.

It is the first Uncharted without Nathan Drake, and it started as a simple downloadable content (DLC), a side story that grew up into a full-fledged game of its own. Sony now calls it a stand-alone Uncharted adventure, and it stars two women, Chloe Frazer and Nadine Ross, who have replaced Drake and Sully as the heroic thieves on a grand treasure hunt. It is time for the women — a treasure hunter thief and a mercenary — to show what they can do with the franchise.

That is good because every new Uncharted game should walk the line between the fresh and the familiar.

Naughty Dog sets up a good story in a believable world 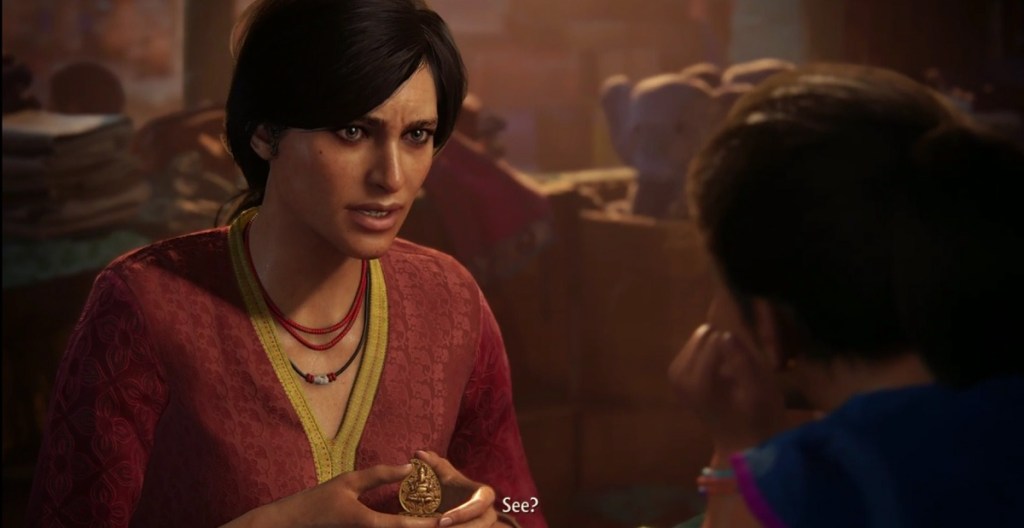 Above: Chloe talks about the god Ganesh with a girl at the bazaar.

The beginning scene isn’t a spectacle, but it sets the tone for game by taking a quiet moment to explore who Chloe Frazer has become. She’s a bit older than in the past games like Uncharted 2: Among Thieves, where she made her memorable debut, and Uncharted 3: Drake’s Deception, where she had a pretty small role. Her skin is darker, and she fits in with the Indian population in the game fairly well.

Chloe is still a thief. But at the outset, she takes a moment to talk with a young girl in a bazaar. In that moment, you can see her kindness and how she sees a bit of herself in the fatherless child. They talk about a little gold statue that she carries around: the Hindu god Ganesh. That little moment and that statue carry a significance in the story.

It reminds us that we know very little about Chloe’s history. In Uncharted 2, she was a darker foil to Drake, a thief who looked our for herself and chose self-preservation and selfishness over any larger purpose. It is a nice moment, and it shows us Chloe’s basic humanity, a goodness that will serve her well later on in the story.

As she leaves the little girl behind, Chloe infiltrates a war zone. The atmosphere of fear is very well done, and it immerses you in the foreboding atmosphere of the city at night. You start climbing the buildings, like you do in all Uncharted games, and you find Chloe’s partner, Nadine Ross, who gave Nathan and Sam Drake a lot of grief as the enemy in Uncharted 4: A Thief’s End. Ross is an uneasy ally of Chloe’s, and their relationship evolves during the game.

The relationship between Chloe and Nadine 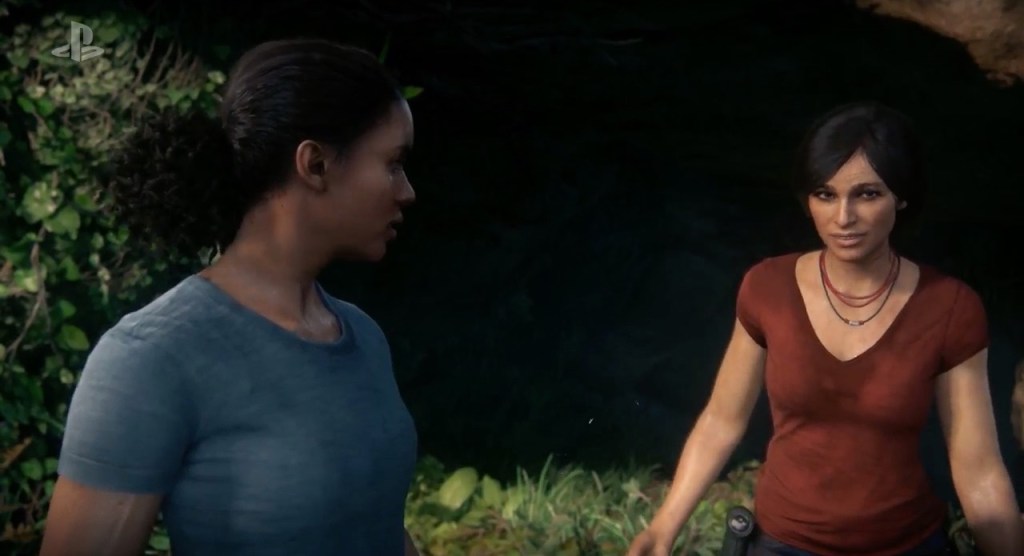 Chloe and Nadine start out as strange bedfellows, tied together only because they’re seeking the same treasure. They don’t trust each other. Chloe is weighed down by thoughts of her lost father, while Nadine is sore about losing control of her father’s company. As they find solitude on their journey together, they change. They think about their choices, and whether they are on the quest purely for the sake of money. Over time, they both find something more important than riches in the quest to find the Golden Tusk of Ganesh.

They learn to banter with each other in a way that reminds me of the jesting between Nathan Drake and Sully. Chloe has a need to control, even to the point where she won’t let Nadine drive the jeep because, she says, “It’s a control thing.” Yet along the way, they face off against an army of insurgent soldiers. And they have to trust each other with their lives. By the time the stakes get really high, each character has to evaluate where they stand, make a choice, and change who they are.

Beautiful free-roaming space in the mountains of India

Above: You can see for miles in Uncharted: The Lost Legacy.

A quest for the Golden Tusk of Ganesh takes Chloe and Nadine into some of the prettiest scenery of any game. Chloe and Nadine find beautiful hidden temples and fortresses in the green mountains of India’s Western Ghats, where they uncover the ruins of the Hoysala empire.

The game features one level where you can roam with your jeep through through a huge place with rivers and mountains. You can drive your 4×4 around the mud and up the rocks. But you can also speed through the rivers and escape the soldiers chasing you. And you can explore the ruins of temples and fortresses in any order. The draw distances are huge, and you can see distant waterfalls, colorful fauna, blue skies, and amazingly realistic water. What I liked about this level was that you could really make use of your jeep, even if it meant driving it off a cliff and going into a complete free fall.

Between the great character facial animations and the outstanding environments, you’ll feel like a tourist ready to take a selfie at every turn.

Above: Uncharted: The Lost Legacy has familiar shooting action.

The game has some action-packed set pieces, exotic destinations, and intricate puzzles. I enjoyed a puzzle that was kind of like a chess board. You had to walk onto steps and watch out for big axes that the statues swung at you. Some nice touches, like a new lock-picking mechanic, you’ll use dozens of times in the game. I had to dispatch hundreds of enemies during the game, some of them in stealthy fashion, and some during hot firefights. I still had trouble with the giant armored machine gunners who come walking out and dare you to stand and shoot them. Of course, without these touches, it wouldn’t be Uncharted.

You’ll see reminders of things from the past games through The Lost Legacy. From the jeep and its handy winch to the mountain-climbing spike, you’ll be reminded of good times from the past. And you’ll see characters that are familiar as well. That’s all I’ll say about that.

Asav is a memorable villain 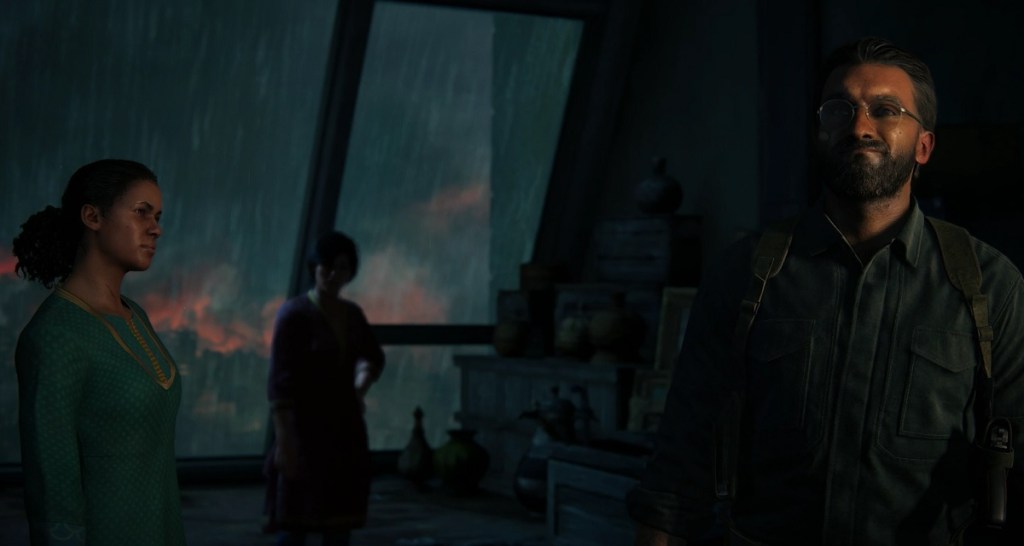 Above: Asav is the nemesis of Chloe and Nadine.

One of the things that strengthens the bonds between Chloe and Nadine is their common loathing of Asav, an Indian insurgency leader who is searching for treasure to finance his rebellion. Asav is a smooth talker who wears spectacles even though he doesn’t need them to see. He isn’t insane in the usual madman sort of way, but he’s got his issues. Asav is more like the villain who won’t quit and who tries to outsmart the heroes at every turn. He lets them solve the problem, and then waltzes in and takes the prize. And he’s got a very annoying army that holds Chloe and Nadine at bay.

Multiplayer can keep you busy

While the single-player campaign is short, you can enjoy a lot of multiplayer combat across 14 maps. Competitive multiplayer features six modes and a big pile of weapons and boosts. It also has co-op play and 50 waves of combat.

This isn’t a full Uncharted experience 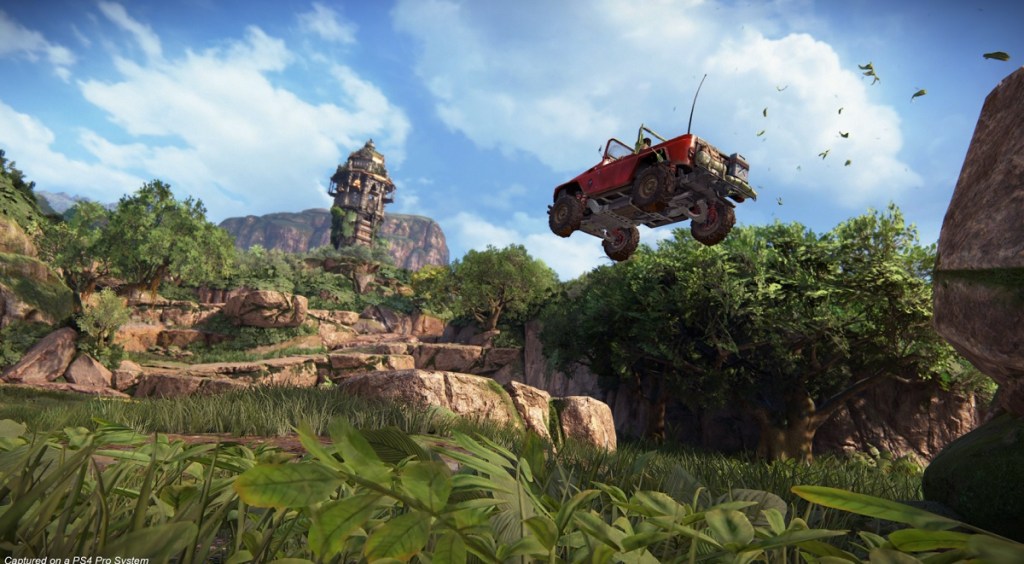 Above: Jeeps can fly in Uncharted: The Lost Legacy (if you drive them off a cliff).

The Lost Legacy is a short game. I spent maybe 25 hours playing Uncharted: A Thief’s End and enjoyed every part of it. This game kept me busy for just 10.5 hours. It feels like a DLC game that grew up to be something bigger. That’s probably why Sony priced it at $40, less than a full-fledged Uncharted game. But we have been trained only to expect the best from Naughty Dog, and it’s a bit of a letdown that the game isn’t longer.

I’ve never had problems with bugs in Uncharted games. But I encountered one that corrupted my saved game and nearly forced me to restart from the beginning. I was stuck in a cavern with water on one side and a cliff on the other. It was a completely broken scene, and I couldn’t find my way out. But eventually, after saving and restarting a number of times, I found my way out. All I can say is that you should save your game periodically, in case the main save gets corrupted.

Not the same boss fight again 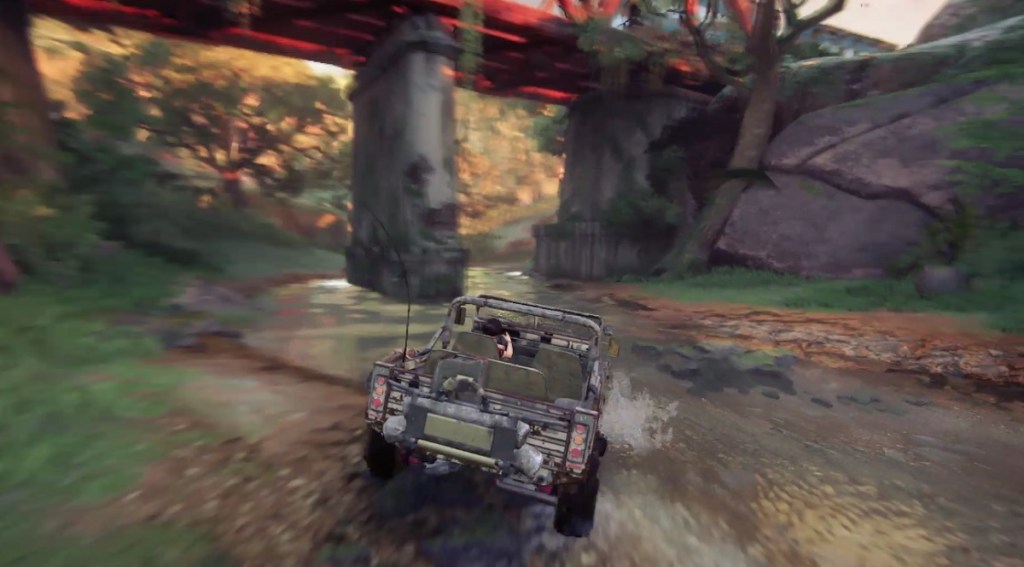 Above: Yep, I played this scene before.

The end of the game is exciting, but we’ve seen it before. You encounter some spectacular chase, action, and shootout scenes, particularly as the story drives toward its conclusion. But I have fought these battles before. I have been in the same firefights. Naughty Dog was certainly trying to make us remember that this was an Uncharted game, with many reminders of the hallmarks of action scenes. But they could have come up with something fresh.

Is this so different from Lara Croft?

Chloe’s a female treasure hunter who climbs a lot. She drives spikes into walls. She takes on armies of men who mean her harm. She’s tough but human enough to be vulnerable once in a while. And she has father issues, as her dad disappeared while hunting down a treasure himself. Does this remind you of anyone? For sure, Chloe is a unique character with a very different past than Lara Croft. But her story and game are familiar enough that they don’t seem as original as they could be. 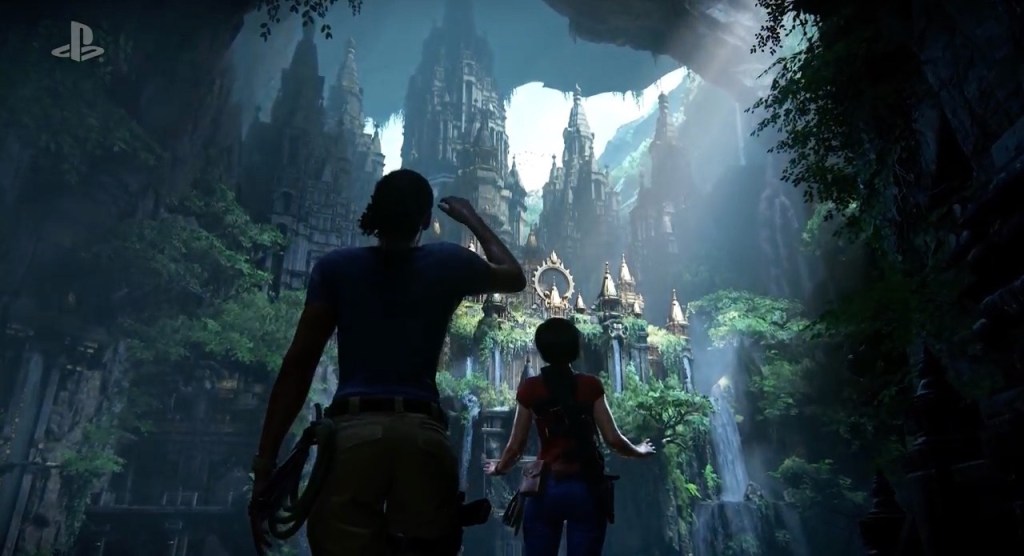 Uncharted: The Lost Legacy isn’t as ambitious a game as the past Nathan Drake titles. It probably suffered from starting out as DLC and then becoming more ambitious over time. Fans will like it, but they won’t love it. It is a bit of a letdown when it comes to providing enough new experiences.

But it explores fresh characters and proves that two female treasure hunters can be just as compelling when it comes to depth and storytelling as the men of the previous games. And it takes us into the beautiful world of India, and its deep mythology that provides a great back story. I appreciated how, in a familiar Naughty Dog tradition, the beginning and the ending looped back to each other. Chloe and Nadine are a good salve for the loss I still feel about the ending of Drake’s story.

Uncharted: The Lost Legacy comes out on August 22 on the PlayStation 4. The publisher provided us with a code for this review.