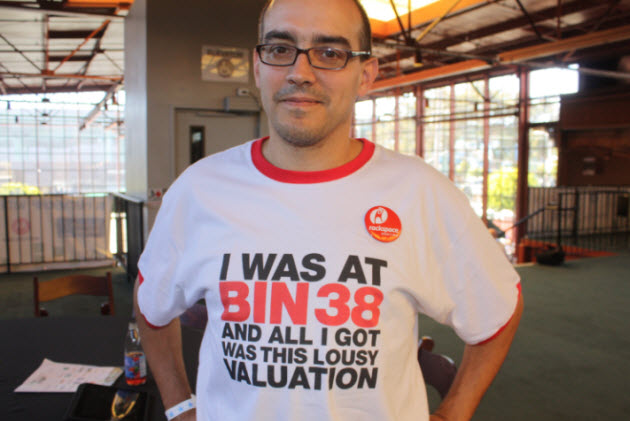 For a short time at the Techcrunch Disrupt conference, Mike Arrington put the so-called “super angels” on the spot to talk about their secret meeting where they allegedly discussion a collusion scheme to hold down startup valuations.

Super angels are well-heeled investors who are veteran tech investors and often have their own funds. Arrington barged in on a recent meeting a group of about 10 of them at the Bin 38 restaurant in San Francisco where, according to Arrington, they discussed matters they should not have, such as how to collude against startup entrepreneurs to hold valuations down. (That could be illegal price fixing, if indeed it was a serious attempt).

Some of those at the meeting, including the funny and profane Dave McClure (pictured, wearing a T-shirt related to the meeting), and Chris Sacca were at the meeting and also on Arrington’s panel. Investor Ron Conway, who wrote a scathing email to the group even though one of his colleagues attended both of their meetings, was also on the panel. The super angels involved say the point of the meeting wasn’t price fixing, although Conway’s published email suggests something was amiss.

The video below captures the conversation at the Techcrunch Disrupt panel. You can see how uneasy some of the panelists, including Arrington, were.