Unity Technologies and film studio Lionsgate have created a virtual reality advertisement for the launch of the Jigsaw horror film, and an analysis shows that, no surprise, a horror VR experience can really rattle your emotions.

Unity created a VR experience to serve as an advertisement for the film, which debuted in late October. It used the Unity game engine to create the interactive ad, where you are tied down in a room in a horror setting. A creepy clown says to you in a video that you have a big decision to make in one minute. You can pull a lever toward yourself and save yourself, or you can push it away, which will cause spinning saw blades to slice into you and kill you. But if you save yourself, a friend who is behind you will get sawed instead.

Unity created a virtual room based on an ad format created by the Interactive Advertising Bureau. The ads ran inside Samsung’s Internet for VR app and Spiraloid’s Nanite Fulcrum VR app on the Oculus Rift. 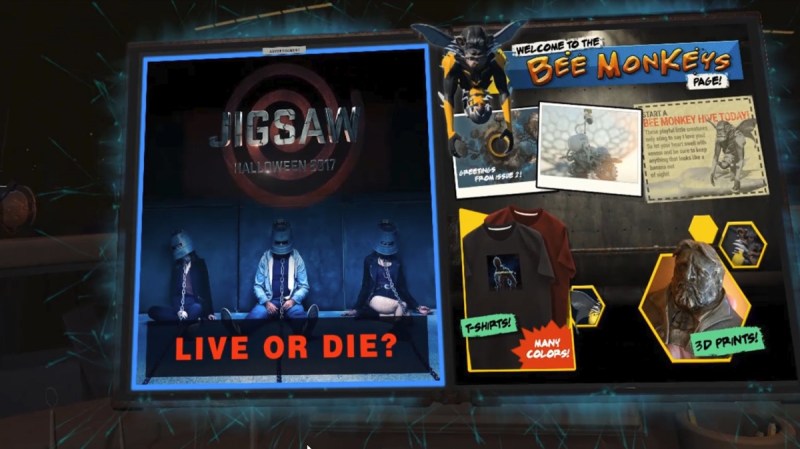 Above: The Jigsaw film’s VR app can show you a comic book experience in VR.

The ad campaign ran over 14 days from October 23 to November 6. Unity’s Virtual Room ad reached 175,000 unique users, and 13.5 percent chose to engage with the experience. Those who experienced it watched it 1.6 times. By comparison, a promotional banner ad received a 3.7-percent click-through rate.

The intent was to inspire fear and excitement. Isobar’s results showed that those who went through the VR experienced substantially greater emotional arousal or engagement as indicated by biometric evaluation. That included an elevated heart rate (up 24 percent), heightened galvanic skin response, or sweating, (up 44 percent peaks per minute), and increased muscle activation (more than three times) associated with smiling.

These statistics were for people who went through the entire VR experience, not just those who saw the trailer in VR.