SAUSALITO, Calif — The middle of the first day of the GamesBeat Summit was devoted to Unity CEO John Riccitiello’s brutal summation of the console war and his predictions for the future.

Discussion began with the future of gaming, as envisioned by Unity. Riccitiello boasted of up to 800 million Unity game downloads per month, making in a fiscal quarter what larger companies like EA just made after a few years in the mobile space. And not building on that success isn’t Unity’s current business strategy.

The goal for this generation is to inject a little “democracy” into game development. Riccitiello wants Unity wherever games are being made, offering a universal ease-of-use for designers of all skill levels and projects. The company also plans to offer more monetization aid to designers, recovering what is currently a limited percentage of revenue gained per sale.

“[We want] to insure that Unity is a good choice for anyone, whether they are trying to build a high-end PC game or a 2D game for mobile,” said Riccitiello. “I truly believe … that one of the bigger problems facing developers is finding an audience for your game and getting paid for that audience. We have a huge team of people working on a simple thesis – that developers are collecting 30 cents on the dollar … for their games, and we want to get them 100 cents on the dollar.” 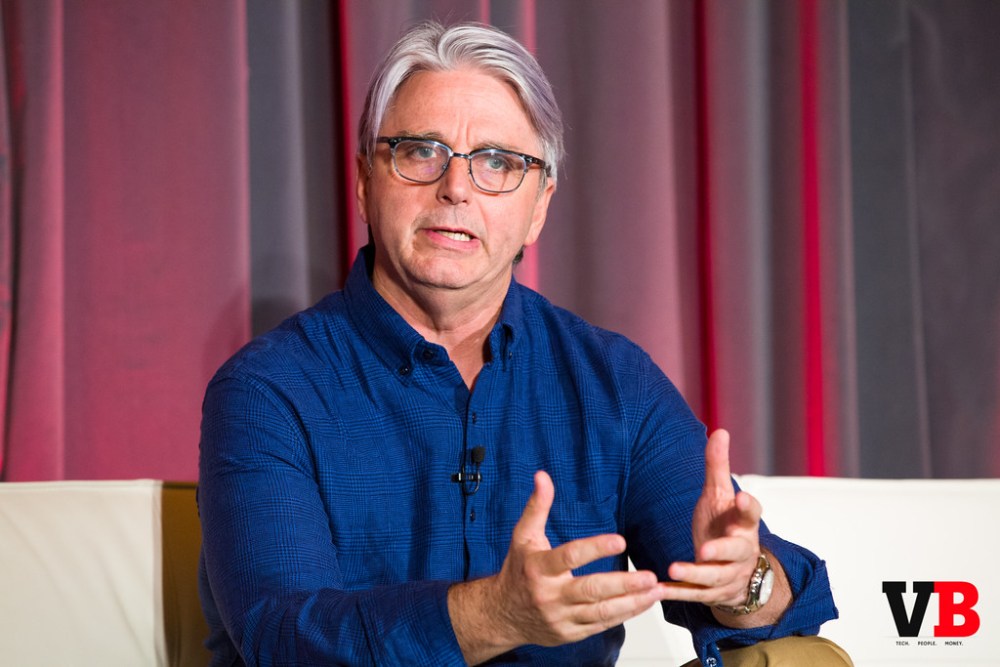 Offering Unity to all is a key aspect to drive up overall efficiency. According to Riccitiello, the current market trajectory won’t be kind to those losing more a majority of each sale.

“The vast majority of independent developers today lose money, and frankly, major publishers on too many of their big titles lose money because they are not able to be fully efficient anymore,” Riccitiello said. “And frankly, if we don’t solve this problem, our ecosystem isn’t going to fill rooms like this [the GamesBeat Summit main boarding room] anymore … the marketing side of events will go unattended.”

The next generation of game machines, even more broadly focused entertainment devices, is going to need this kind of democratization. Without a universally accessible platform like Unity, Riccitiello envisions a future of vertically integrated islands, each with their own complex barriers to entry.

“The reality is that the tools that underline technology that you use for iOS and for Android and we use for our Samsung and smart TV … whatever it is for tomorrow’s technology, these are often very vertical … closed systems that each has its own set of tools,” said Riccitiello, after being prompted by moderator Dean Takahashi of GamesBeat. “What Unity does is we cut across that, build a bridge across the top. Simplifying that — if you will – platform complexity and increasing the monetization opportunity. …”

A culture of copycats

Titles that flow to the top of democratized platforms (or any platforms for that matter) tend to be cheap imitations of popular mechanics. Mimicry is more than just on sales charts, though, if Riccitiello’s event experience is any indication. And that may not always be something to despise.

“Go to anyone of these conferences, and someone will pull you aside and show you something on their phone, and it’s almost invariably a Clash of Clans clone,” Riccitiello said. “There are examples of games at the very top of the charts where they literally took someone else’s idea and polished it and improved on it in a small way. But that level of execution is to be admired anywhere, in the execution there is art. But ultimately it is … demoralizing to see the level of copying and ‘me-too-ism’ that is typical of game development, it’s sort of the easiest route, and I understand why people do it.”

Me-too-ism may be one thing, but Riccitiello showed less tolerance toward what he felt was the intrinsic repetitiveness of the console market. Outside of a glowing mention of BioShock Infinite, though more for the world design than the game mechanics, the home system market seems to be on a constant loop to the Unity CEO.

“Mobile has barely scratched the surface of opportunity, and consoles desperately need reinvention in terms of some of the game mechanics,” said Riccitiello. “Since 1997, the advent of 3D gaming, so many of the mechanics are exactly the same. There has been some innovation … but not enough. There is too [much] ‘I’m going to make that game and make it a little bit more this way or a little bit more that way.'”

The clash of big ideas 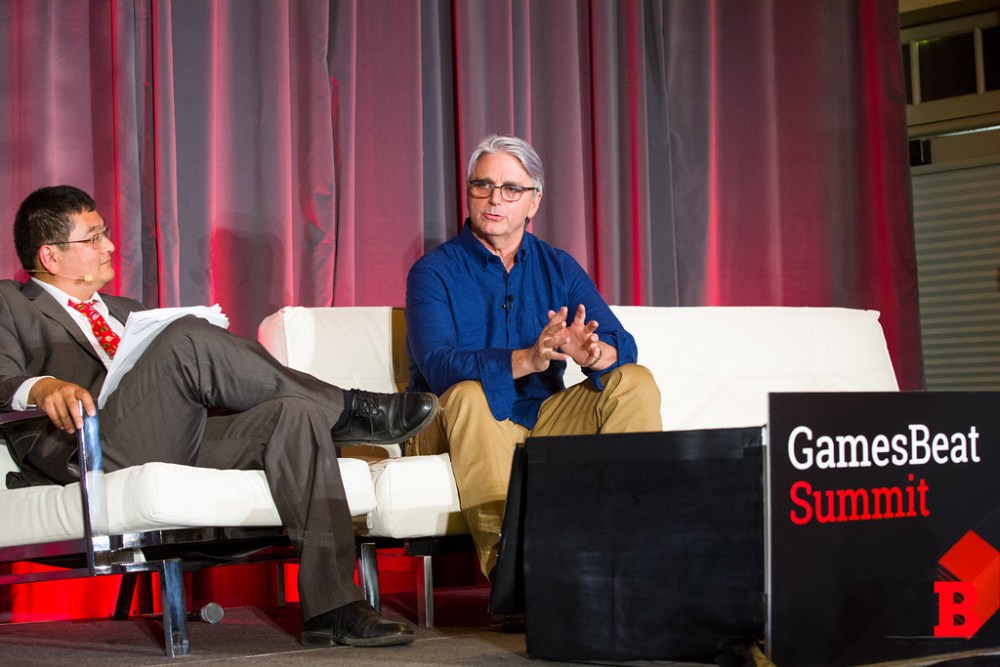 Above: At the GamesBeat Summit, John Riccitiello suggested that Microsoft’s broader entertainment focus was short-sighted compared to Sony’s gamer-based approach.

The normally candid Riccitiello grew even more so when the topic of discussion turned to the battle between the Xbox One and PlayStation 4. He mused that the far-and-away market dominance of the PS4 was due to a clash of titans, of big ideas. Ideas Microsoft bet big on, and lost.

“That’s one of the more — in my opinion — depressing stories in the last couple of years,” Riccitiello said. “In the battle of big ideas … there was a clash of ideas that really separated Sony and Microsoft. They actually had very similar architecture that they were trying to bring to the table. But Microsoft focused … a lot on entertainment beyond gaming. Microsoft was trying to [compete against] Apple. They didn’t feel gaming was big enough to justify the pent-up desire … to have the recognition they wanted as an innovator.”

Contrast that with what Riccitiello deemed a “gamer’s first” approach from Sony. The Unity CEO summed the entire console war as a shot of billiards.

“Sony just said, ‘We’ve made the best fucking game system we could’ … partly because they didn’t have the resources to do more about it,” said Riccitiello. “Microsoft was focused on the shot after the one they needed to make, putting the 7-ball in the corner pocket, but they missed the first shot and didn’t get another shot after it. Sony focused on the shot they needed to make, which was win the hearts and minds of the gamer. The broader scope of entertainment might be a bigger idea, but not with an unfocused execution. A tight execution on the 50 million people that matter, which are the people currently lapping up consoles … Sony fucking nailed it, and they deserve the victory.”

Discussion ended, as many of GamesBeat Summit sessions did, with talk of the future. Riccitiello offered his take on what became the dominant summit topic of augmented and virtual reality, demanding patience for what he viewed as an inevitable, but rather costly, entertainment future.

“Almost all of the big, sexy stuff we imagine takes a PC to run it,” Riccitiello said. “It takes a PC — not like the one you can buy, your laptop — it takes a … water-cooled [PC with] a custom case, a lot of energy to conduct those processing needs. The process of the experiences that we want, we’re talking a couple thousand dollar box. This is going to follow a pattern … more like DVDs being a thousand dollar box and after a few years you get to $200 and $100 before it really became a massive market item. This is going to be as revolutionary as we all think about it .. .but it’s going to be slower because it’s going to require hardware that none of us own right now. That beautiful zenith is just going to take more money and more time.”